Putin changed his rhetoric to “outplay” everyone

The rapid offensive of the Ukrainian troops has noticeably slowed down, and Russia is actively seeking to extend this pause.. In this regard, Putin's rhetoric has changed from bloodthirsty and aggressive, to almost friendly, in the circle of a few partners.

Putin recently visited Kazakhstan, where he spoke in a manner unusual for him lately, commenting on Russia's failure on the sidelines of the UN General Assembly.

“Russian diplomats tried to explain the fiasco - 143 states supported the resolution (two more than they supported the March 2 resolution condemning Russian aggression) to recognize the regime in Russia as terrorist - solely the result of behind-the-scenes “arm-twisting” by the United States and its allies. However, Putin had many other reasons for softening his speech,” political analysts say.

According to them, Putin's main concern is to avoid untimely irritation of his key strategic partner Xi Jinping, who is busy asserting his dominance at the 20th National Congress of the Communist Party of China, which began on October 16.. The Russian president knows that his “dear friend” does not approve of the ongoing war against Ukraine and is committed to a speedy cessation of hostilities, so a show of restraint should be accepted by Beijing as appropriate behavior for now.. Therefore, Putin has refrained from any mention of nuclear options.

“Even more striking is the change in Putin’s tone on energy issues as blatant blackmail has morphed into offers to resume gas exports to Europe amid falling prices.. Explosions on the Nord Stream 1 gas pipeline (coinciding with the explosion on Krymsky) alarmed Germany, Denmark, Sweden and especially Norway - a major supplier of gas to the European market - but Putin's "good will" did not find "buyers".

He also put forward a proposal to expand the routes of Russian exports to Europe through Turkey, but even President Recep Tayyip Erdogan, who for many years cherished the dream of turning Turkey into a major gas hub, remains indifferent to Putin's proposals.. Erdogan knows only too well that Gazprom is in such a difficult financial and technological position that the project of laying another underwater pipeline would be completely beyond his means,” political analysts say.

“Putin plans to get from Erdogan not only the expansion of Turkish channels to circumvent the Western sanctions regime, but also with the hope of undermining and splitting the unity of the Western alliance,” political strategists suggest, “Massive Russian missile attacks on Ukrainian cities on October 10 prompted NATO to again increase military support for Kyiv, including multi-layered air defense capabilities, and the Kremlin is seeking to weaken this support. By alternating between hard and soft rhetoric, Putin is trying to reduce NATO allies' sense of urgency for military assistance to Ukraine and thus narrow capacity gaps.

Military analysts note that the Russian Federation is experiencing a shortage of military equipment, which, in their opinion, means that the army cannot even be provided with uniforms, not to mention usable weapons. 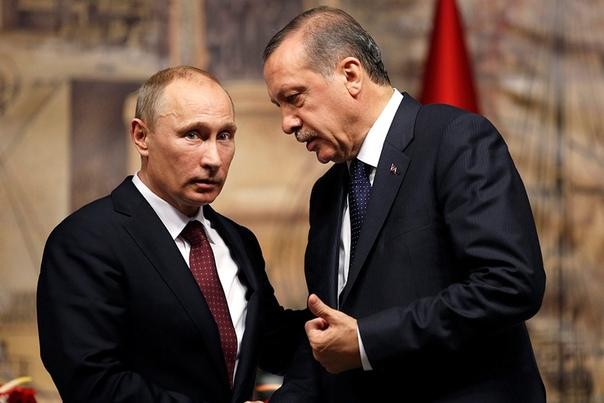 “The Russian military industry is completely unable to increase the production of weapons, since many of the supply chains affected by the sanctions have been damaged and now cannot be restored.. In addition, many businesses are in decline due to the sudden emigration of key management and IT professionals,” economists say.

Western experts say the morale of the mobilized continues to dwindle as they arrive in unbearable conditions at training centers, resulting in continued deaths of recruits at their “training” sites.. “Putin tried to calm the panic by announcing that there would be no more waves of mobilization, but it seems that his words are no longer believed even inside Russia,” they write.

The softening of Putin's rhetoric, including calls for negotiations, will continue only as long as the Armed Forces of Ukraine are preparing for a new breakthrough on the fronts, military analysts say. This approach, in their words, will inevitably be discarded as the Kherson defenses are destroyed. “It will be impossible to explain this by another “regrouping”, because many of the encircled troops are likely to capitulate or desert, and the blame for this loss of the recently annexed territory cannot be blamed on the new “commander of the grouping of troops” of the enemy, General Sergei Surovikin. Therefore, one should not perceive the current position of the Kremlin as something “anti-war” and the beginning of an admission of defeat. This is just another unintelligible attempt by Putin to “outplay everyone,” Ukrainian analysts comment on the behavior of the Russian president.

Experts predict the fall of the Russian Federation afte...

Experts predict the fall of the Russian Federation afte...