Residents of Izyum told horror stories about the dead - media 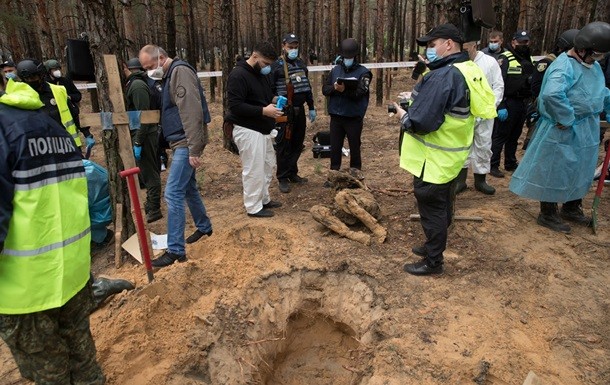 At the spontaneous cemetery - civilians, soldiers, women and children who died during the occupation. On the first day of the exhumation, the bodies of 22 locals and the mass grave of the military of the Armed Forces of Ukraine were dug up and taken for examination, where 17 soldiers were buried.
This is stated in the plot of the Ukrainian media.

For five months the city was under daily shelling and, according to preliminary data, about a thousand civilians died during this time.. Some - in front of the most relatives.

“I see that she is falling. I ran up, I look, the blood went out of my mouth and nose. I was a handkerchief, as if I was trying to pull out my tongue, to do artificial respiration. Turned the head. I sat until the neighbors came out and said: don’t torture your grandmother,” says the son of the deceased Grigory.

The streets of Izyum for the first weeks were littered with the bodies of the dead. Only in one of the houses 46 civilians were killed at once. They hid in the basement when the invaders dropped an aerial bomb on the high-rise building. Only seven survived, including Grigory and his mother. On that day, he lost his best friend - all of his relatives and almost all of his neighbors.

"I'm on the first floor, and he's on the third floor - the name is Yasenyuki. His whole family died, and this is seven people. 46 died immediately. Not all at once, some were still on fire or simply crushed," the man says.

At first, the dead were buried in courtyards, and then there were so many that they had to be buried even in flower beds.

"There were graves under every entrance. Fragments, someone filled up, someone with these cassettes. And the neighbors carried it out and buried it right under the entrances," witnesses say.

And already in the summer, the invaders decided to clear the streets of graves, people say. The dead were reburied in the forest without relatives, they were given the numbers of the graves.

"Ours were buried, relatives were taken away. They didn't let us in, we didn't see the pits, but they gave us numbers. Under what numbers we will go and find our children. Who are the children, who are the nephews, who are the colleague and we will be able to bury. It can't be that they deceived us. They didn't let me go to the cemetery. Just a number," people say.

To find out the cause of death and identify the victims, forensic experts conduct an exhumation. During the day, 41 bodies were unearthed, almost all with signs of violence.

"In the first grave, a rope and hands are also tied around the neck. On some bodies we find the consequences of torture. We were very lucky that they were buried in clay. In the clay, the bodies do not decompose so quickly, so we see both teeth and some kind of shape," says Alexander Ilyinkov, head of the Kharkiv District Prosecutor's Office of the Kharkiv Region.

The largest burial was the mass grave of soldiers of the armed forces. The occupiers ruthlessly killed 17 defenders of Ukraine, a blue-yellow ribbon remained on the hand of one of them.

“Now all medical studies, all medical examinations will be carried out. After that, we will decide depending on whether we find loved ones. And then we will determine it there in order to really pay tribute and bury our people in proper condition," said the head of the Kharkiv military-civilian administration, Oleg Sinegubov.

In total, 450 graves were found in the spontaneous cemetery. There are crosses with surnames, however, most only with numbers. Law enforcement officials suggest that more than one body may be in the graves.