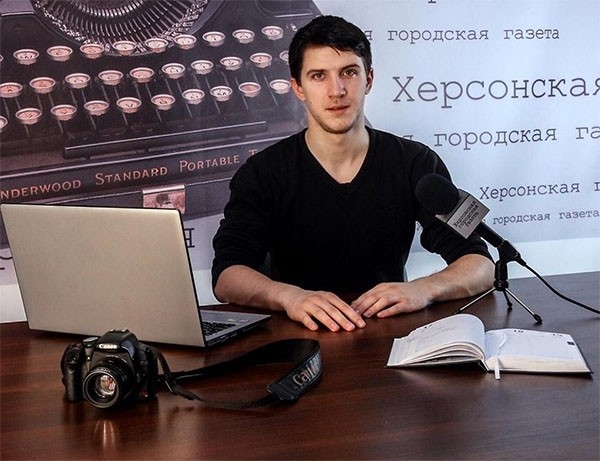 Konstantin Ryzhenko, editor-in-chief of the Kherson News city website, said that on the evening of December 20 in Kyiv, an unknown person attacked him with a pistol, firing a pistol. Ryzhenko wrote about this in Telegram.

According to the journalist, he was saved by the fact that he was wearing a bulletproof vest. Ryzhenko reports that he was taking the subway to the training ground - for classes with the security forces.

"In order not to carry in the hands of the armor in which I am engaged, I put it on myself. When I was returning, I decided to go to the pharmacy, because I still have a little cold. In the darkest corner of the street near the intersection near the pharmacy, a man quickly approached me and fired two shots in the chest area. After that, I fell, and the man quickly ran in the direction of Ovruchskaya," the journalist said.

Ryzhenko was diagnosed with bruised ribs and soft tissues. He claims that his life is no longer in danger.

The journalist wrote a statement to the SBU, an investigation was launched. Witnesses are needed, so Ryzhenko urged eyewitnesses to contact him or the SBU.

"I associate this with my professional activities, and, most likely, there is a" Russian "trace here, but it can be different - under the guise of a war, small trifling people can sometimes settle scores," Ryzhenko added.

Recall that the number of journalists killed in the world in 2022 increased by 45%.

As a result of Russian missile attacks in Ukraine, 11 c...

In the Kiev region, a Russian rocket hit the Goloseevsk...

Two flights are delayed due to blackouts on roads

Aggressors hit an energy infrastructure facility in the...

Electricity cut off in three regions of Ukraine

About 15 UAVs of the Russian Federation were shot down...

In the Kiev region, a Russian rocket hit the Goloseevsk...

As a result of Russian missile attacks in Ukraine, 11 c...

About 15 UAVs of the Russian Federation were shot down...

Aggressors hit an energy infrastructure facility in the...

Two flights are delayed due to blackouts on roads

Electricity cut off in three regions of Ukraine