In the Donetsk region, doctors are forced to donate blood for the troops of the Russian Federation 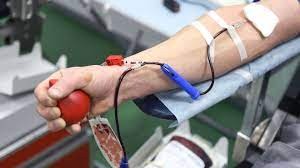 In Gorlovka, Donetsk region, medical workers are forced to give blood for the Russian military, as the occupiers do not have enough donor blood.

This was announced by the General Staff of the Armed Forces of Ukraine.

"In the city of Gorlovka, Donetsk region, due to the lack of donor blood, all employees of medical institutions were obliged to donate blood in accordance with the schedule," the headquarters notes.

In addition, according to the headquarters, in the city of Starobelsk, Luhansk region, about 50 seriously wounded enemy servicemen have recently been delivered to a military hospital equipped by the occupiers.