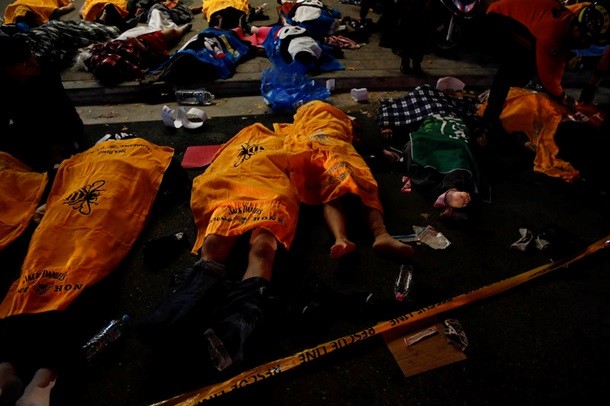 The death toll from a stampede at a Halloween celebration in South Korea's capital has risen to 149, including two foreigners. This was announced by a representative of the Seoul authorities on the air of the YTN TV channel on Sunday, October 30.

According to updated data, 76 victims are in serious condition in hospitals, including 15 citizens of other states. What exactly is not specified.

According to the TV channel, about 1,700 doctors and rescuers and 140 ambulances and fire brigade were sent to the scene of the tragedy in the center of Seoul.

It is noted that the rescuers carried out resuscitation right on the street. At the same time, the death of about 70 people was ascertained at the scene, the rest died on the road or in hospitals.

Most of the victims are under 30 years of age.

The top officials of South Korea held an emergency meeting because of the incident. President Yun Sok-yeol called for prompt identification of all the dead and injured and informing their relatives, as well as a thorough investigation into the incident.

Recall that the tragedy happened yesterday. In a narrow alley in the center of Seoul, a crush formed, previously, due to the fact that in one of the bars there was supposedly a local "star".

UPDATED: According to the latest data from the Ministry of Internal Affairs of the country, 156 people were killed and 152 were injured.

The occupiers launched a missile attack on the Dneprope...

Three employees of the pre-trial detention center in Kh...

Three employees of the pre-trial detention center in Kh...

The occupiers launched a missile attack on the Dneprope...