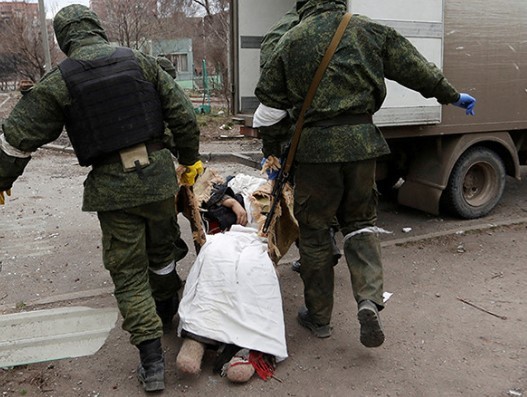 The invaders threw all their efforts into the treatment of the Russian military, not taking into account the needs of the inhabitants of Mariupol. Every fourth patient dies in the hospitals of the occupied city.
This was announced by the adviser to the mayor of Mariupol Petr Andryushchenko.
According to him, people are placed in hospital corridors, since all normal places are given to the Russian military. In addition, patients do not have enough medicines. Mariupol residents are offered to buy the necessary medicines in pharmacies that are associated with firms close to the "head of the DPR" Denis Pushilin and local businessman Yuri Ternavsky, who cooperates with the occupation authorities.
As Andryushchenko writes, Ternavsky gives part of the profit to the structures of the former head of the "Party of Regions" in the City Council, Pyotr Ivanov, who also cooperates with Russia.
Andryushchenko emphasizes that insulin dependents are the worst. According to him, the endocrinologist, who came from Russia, sees only once a week in one hospital:

“He also“ distributes ”insulin in syringes. That's why not everyone is lucky. No one controls the situation of compatibility, the selection of insulin. There is simply no medicine in the city. Nothing but an illusory one,” Andryushchenko said.

In early June, a cholera outbreak broke out in Russian-occupied Mariupol. This was warned by the regional director of emergency situations of the World Health Organization Dorit Nitzan: “We received information from non-governmental organizations working there that the streets are just a swamp and sewage water is mixed with drinking water.. This is a huge threat to the spread of many infections, including cholera.”

Another ex-Minister of Defense declared suspicion of tr...

The aggressor hit the Vinnytsia region with "Dagger" mi...

Russian tanker received 10 years for shelling a house i...

Missile shot down in Uman district and fire broke out

Missile shot down in Uman district and fire broke out

Another ex-Minister of Defense declared suspicion of tr...

The aggressor hit the Vinnytsia region with "Dagger" mi...

Russian tanker received 10 years for shelling a house i...