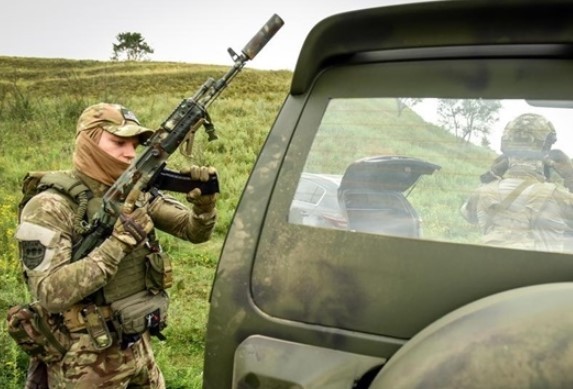 According to the General Staff of the Armed Forces of Ukraine, the Russian invaders have stepped up assault operations in several directions in the Donetsk region. Enemy attempts were unsuccessful.
So, in the Kharkov direction , the enemy fired from cannon and rocket artillery in the areas of the settlements of Prudyanka, Dementeevka, Ruska Lozovaya, Petrovka, Stary Saltov, Pitomnik, Sosnovka and Bolshie Passages. Engaged aviation to strike near Gusarovka.

The enemy waged an offensive battle in order to improve the tactical situation in the area of the settlement of Uda, after a fire defeat by Ukrainian soldiers, he retreated.

The enemy tried to conduct aerial reconnaissance of the UAV in the area of Bogorodichny. The aircraft was destroyed by Ukrainian defenders.

The enemy units made an attempt to conduct assault operations in the direction of Shnurkov, but they were not successful, they retreated.

In the Kramatorsk direction, the invaders shelled the areas of Zvanovka, Seversk, Verkhnekamensky and Slavyansk from cannon and rocket artillery. Air strikes were carried out near Grigorovka and Prishib.

In the Bakhmut direction , shelling from tanks, cannon and rocket artillery was recorded near Soledar, Dolina, Zaitsevo and Belogorovka. The enemy launched air strikes in the areas of the settlements of Soledar and Kodema, as well as a missile attack near Konstantinovka.

The invaders waged offensive battles in the directions of Zaitsevo, Shumy and Kodemy. They were rebuffed and retreated.

In the Novopavlovsky direction , the territories near Ugledar, Velikaya Novoselka, Prechistovka, Novopol and Zeleny Pole were subjected to enemy fire.

The enemy fought offensive battles in the direction of Potemkin, had no success, retreated. He also deployed reconnaissance UAVs near Davydov Brod, Snigirevka and Bolshoi Artakovo.