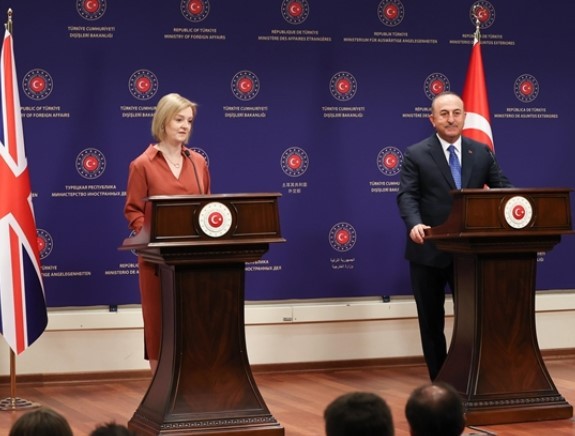 Turkey seeks a constructive role and is making efforts to overcome the grain crisis, including continuing active negotiations on this issue with both Russia and Ukraine.
This was stated by Turkish Foreign Minister Mevlut Cavusoglu at a joint press conference with British Foreign Minister Liz Truss, Turkish Anadolu agency writes .

Cavusoglu called the UN plan to export grain from the ports in the Black Sea quite real and said that Turkey fully supports it. Earlier, the minister argued that the export of Ukrainian grain is possible without demining ports: the UN proposed the creation of a safe maritime corridor through zones where there is no mine threat.

If an agreement can be reached in Istanbul, then a Monitoring Center will be created, as well as a “security zone” directly outside the waters of Ukraine. The minister stressed that Turkey will not allow grain stolen by Russia or any other state to be delivered to the country.
Truss, in turn, said that the crisis with the supply of Ukrainian grain must be resolved within the next month, otherwise a real famine will begin.. She offered to provide any assistance to resolve the issue.

Ukrainian ports need to be protected and commercial ships need to be given a safe corridor, Truss said.

The United Kingdom offers all of our experience in all these areas to ensure that grain can be exported unhindered, but this will require an international effort.
Earlier, Turkey stated that it had made progress in negotiations with Russia on the export of Ukrainian grain. As a result, the Turkish dry cargo ship Azov Concord was able to leave the Ukrainian port in Mariupol. Thus, the ship became the first commercial vessel to pass through the blockade of the Russian navy.

Refusing Russian gas, Europe goes to hardships for the...

Information of the General Staff on the losses of the R...

The General Staff of Ukraine will coordinate the partis...

A strategy to return our entire territory, - the head o...

The General Staff of the Armed Forces of Ukraine report...

An order was received to leave the city of Severodonets...

Von der Leyen: There will be no more normal relations b...

A strategy to return our entire territory, - the head o...

Von der Leyen: There will be no more normal relations b...

An order was received to leave the city of Severodonets...

The General Staff of the Armed Forces of Ukraine report...

Refusing Russian gas, Europe goes to hardships for the...

The General Staff of Ukraine will coordinate the partis...

Information of the General Staff on the losses of the R...