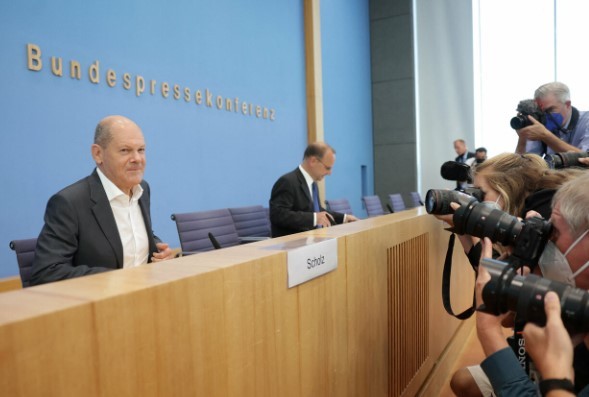 Against the backdrop of discussions in the EU over a visa ban for Russian citizens, German Chancellor Olaf Scholz does not support this idea.

He said this at the annual press conference of the German Chancellor, Tagesspiegel reports..

The chancellor believes that this is a war of Russian President Vladimir Putin, not Russians.

“This is Putin’s war. And that's why it's hard for me to agree with this idea," he said.

According to him, the EU has already decided on personal sanctions against people from decision-making centers in Moscow.

"We will continue this," Scholz added.

He does not consider justified the introduction of punitive measures against all Russians. According to him, such a ban would weaken the effectiveness of the sanctions "if they were directed against everyone, including the innocent."
Foreign Minister Dmitry Kuleba did not agree with this statement by Scholz.

“Not Putin, but real Russian soldiers came from Russia to kill, torture and destroy. Russians predominantly support the war, suffer from rocket attacks on Ukrainian cities and killings of Ukrainians. Let then Russian tourists enjoy Russia, ”wrote the head of the Foreign Ministry of Ukraine Dmitry Kuleba on his Twitter page.