Leaders of "Azov" managed to be released from Russian captivity 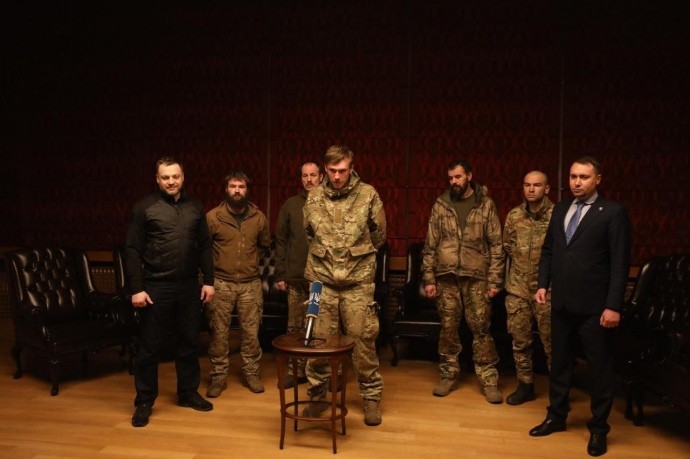 The leaders of "Azov", who were at "Azovstal" - the commander Denis Prokopenko "Redis" and his deputy Svyatoslav Palamar "Kalina" managed to be released from Russian captivity.

This was announced by the commander of the special forces KRAKEN Sergey Velichko in the telegram channel, the former commander of Azov Andrey Biletsky.

In the telegram channel "Chile and Co. Kharkiv" Velichko (call sign Chile) published a picture with the released Ukrainian defenders.

In addition to Prokopenko and Palamar, the commander of the 36th separate marine brigade, Major Sergei Volyn, was released from the captivity of the Russian invaders.

The head of the Main Intelligence Directorate Kirill Budanov and Interior Minister Denis Monastyrsky also appear in the published photo with them.

"I just talked on the phone with Radish, Kalina and Apis - everyone has a fighting spirit and is even eager to fight. Another confirmation that AZOV is STEEL. Now the guys are already free, but in a third country, where they arrived in accordance with the exchange agreements. They will stay there for some time, but the main thing has already happened - they are free and alive," Biletsky said.

According to the UP, the Ukrainian side gave Russia Putin's godfather Viktor Medvedchuk, who is suspected of treason in Ukraine.

Also, according to UP sources, the exchange of prisoners was only agreed on Sunday, September 18.

215 Ukrainian defenders were released during the September 21 exchange.

It is known that among the released Ukrainian defenders were: the head of the patrol police of Mariupol Mikhail Vershinin, paramedic Ekaterina Polishchuk with the call sign "Bird", senior sergeant of the 36th brigade Mikhail Dianov, pregnant military medic Maryana Mamontova, and Dmitry Kazatsky from Azov, whose photo circled the whole world.