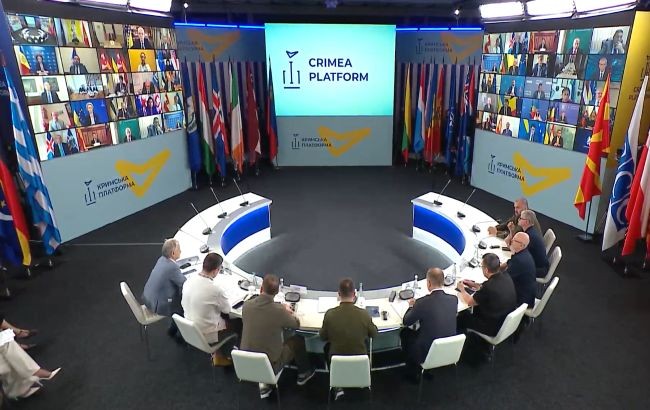 The second summit of the Crimean platform started in Kyiv. The event is attended by representatives of about 60 countries of the world, among them about 40 - at the level of presidents and prime ministers.
In his speech at the opening of the summit, Zelensky addressed world leaders and defenders of the international order, calling on them to support Ukraine.
Zelensky stressed that in order to win the world, one must not forget what the path to the current situation was. According to him, the degradation of Russia began with the seizure of Crimea, with terror against the indigenous people of Crimea - the Crimean Tatar people, with repressions on religious grounds. The President called the persecution of Russia "the largest religious persecution" that could occur in the 21st century against the Muslim community in Crimea.

"The occupiers did this after the shameful seizure of Crimea and further spread crimes to the Donbass, Syria and other African countries, where Russian banditry is present under the guise of Russian special services," Zelensky said.

The President thanked many leaders who were not silent about the crimes of Russia, opposed it and helped Ukraine. However, many were silent and tried not to notice what was happening in Crimea, the head of state stressed.

"And this happened to be one of the key reasons for what is happening now in Ukraine and the world," he added.

“We are restoring the force of international law. And it is thanks to this that we are returning the Ukrainian flag to our land, to Crimea, we will bring freedom to Ukrainian citizens on the peninsula, and we will definitely return justice to those who suffered from the occupiers," the president said.

The President emphasized that in order to overcome terror, restore predictability and security, it is necessary to win with Russia and liberate Crimea from occupation.

"Where it began, there it will end. This will be an effective resuscitation of the international legal order," Volodymyr Zelenskyy said.

Recall that the leaders of European countries, the United States, Asia, Latin America and Africa, as well as the European Commission and the Council of Europe, NATO and the Mejlis of the Crimean Tatar people take part in the summit.
During the summit, representatives of the countries will discuss several thematic issues:
It is expected that the Summit participants will approve a Joint Statement following the event.