An order was received to leave the city of Severodonetsk. What will happen next? The Ukrainian military left the industrial zone of Severodonetsk on the night of June 24. The day before, Commander-in-Chief Valery Zaluzhny explained that the Armed Forces of Ukraine were forced to conduct a mobile defense and occupy more advantageous lines and positions. The exit from Severodonetsk was expected long ago.

The head of the OVA, Sergei Gaidai, said that the defenders of Severodonetsk had received an order to retreat to new fortified positions.

"Unfortunately, we will have to take our guys. This is what we talked about, that there is no need to breed "zrada", no one leaves our guys, no one there will allow the environment. Now there is a situation where it makes no sense to be in positions that have been broken for many months, just to be there," Gaidai said.

Ukrainian servicemen, who controlled the territory of the Azot chemical plant in Severodonetsk, are withdrawing to new positions in fortified areas in order "from there to conduct normal and full combat operations and inflict damage on the enemy," Gaidai said.

At the same time, in the morning summary of the General Staff of the Armed Forces of Ukraine on June 24, there was no talk of a retreat.. The military reported that the fighting for Severodonetsk continues.

Later, the Ministry of Defense of Ukraine stated that information on Severodonetsk was closed and called the city and its environs the hottest point of the front - the actions of the invaders in other directions are mainly diversionary maneuvers so that the Armed Forces of Ukraine would transfer reinforcements to hot spots.

"Information about whether units of the Armed Forces of Ukraine are located in a certain area, including Severodonetsk, is closed. We don't talk about it. I would very much like to ask everyone to focus on the information provided by the General Staff and the Ministry of Defense," spokesman for the department Alexander Motuzyanyk said.

The day before, Commander-in-Chief of the Armed Forces of Ukraine Valery Zaluzhny issued a short note in which he noted that the Ukrainian army is very difficult at the front, since the fire advantage is on the side of the enemy.

"Despite everything, we are holding on. The situation is difficult, but controllable. We are forced to conduct a mobile defense, to occupy more advantageous lines and positions. But every meter of the land seized by the occupier is covered with his blood," Zaluzhny explained.

Ukrainian servicemen found themselves in a situation that threatens to be surrounded by the city of Lysichansk - just a couple of kilometers from Severodonetsk. This is the last large city in the Luhansk region, which is under the control of the Armed Forces of Ukraine. 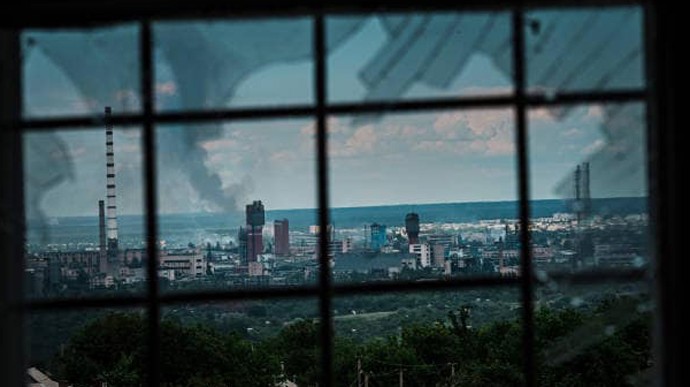 In the near future, the Russian occupation troops will try to capture Severodonetsk and Lisichansk in order to reach the administrative borders of the region.

In the future, the enemy plans to focus its efforts on capturing the largest cities in the Donetsk region - Kramatorsk and Slavyansk, said Deputy Defense Minister Anna Malyar.

The Armed Forces of Ukraine do not plan to leave Lisichansk yet, said Roman Vlasenko, chairman of the Severodonetsk regional state administration. According to him, Ukrainian troops are still in Severodonetsk, it will take time to get out of the city.

"It's not a matter of an hour or a day. It may take some time," he told Radio Liberty on June 24.

The capture of Severodonetsk and Lisichansk will not only not give the Russian invaders an advantage in the war, but will also worsen their capabilities, experts of the American Institute for the Study of War recalled.

"These achievements are unlikely to provide Russian forces with a decisive advantage in further operations in Ukraine and lead to a deterioration of Russian capabilities, preventing them from focusing on more advantageous lines of attack," the report says.

Ukrainian military expert Mykhailo Samus says moving out of Severodonetsk to better prepared positions in Lysychansk will allow Ukrainian troops to once again hold off Russian advances and continue to draw Russian troops away from other directions.

"We know that Ukrainian troops are now effectively working in the Kherson region, and there is also information about the preparation of counter-offensive operations in the Zaporozhye region.. Therefore, it is precisely the concentration of Russian troops in the Donbas that allows Ukraine to fulfill its tasks," he said.

Thus, by strikes in various directions, conditions are formed for an offensive in the Kherson region.

The expert agreed with the ISW's statement that the loss of Severodonetsk would not change anything on the front: it would only mean that the Ukrainian troops retreated to more advantageous positions in terms of countering the enemy.

"If we move away from Severodonetsk, then we get an additional opportunity to work on the Popasnian group, thus stopping the danger of moving, for example, to the north and east, which will drastically reduce the danger to the Ukrainian group," the expert explained.