The Pope declared great respect for Russian humanism. In Ukraine they answered 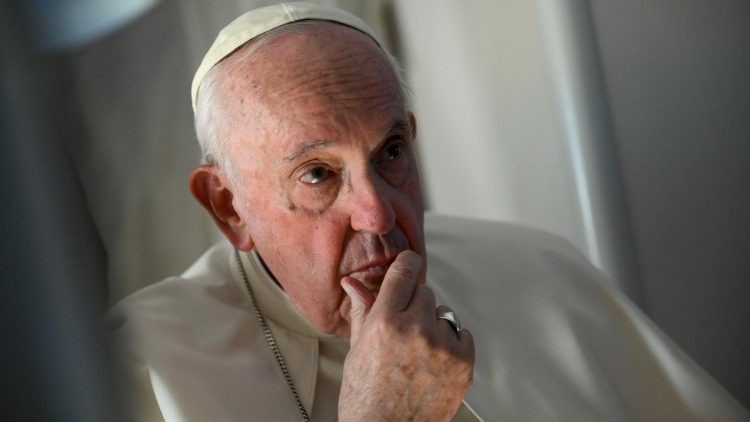 Pope Francis declared great respect for the Russian people and their humanism, and the cruelty with which Russian troops operate in Ukraine is not characteristic of the Russian people. Ukrainian diplomats reacted to the words of the pontiff about Russian humanism.
According to Vatican News, upon his return from Bahrain, the pontiff explained to journalists why in his sermons in relation to Ukraine he uses the word "martyr" (literally: "martoriata" - "tormented" from "martoriare" - "torture, torment").

"I am struck by a cruelty that is not characteristic of the Russian people, perhaps because the Russian people are a great people. This is the cruelty of mercenaries, soldiers going to war for adventure... I prefer to think about it this way, because I have great respect for the Russian people, Russian humanism. Remember Dostoevsky, who still inspires us Christians to think like a Christian," the Pope said.

He noted that he loves both the Ukrainian and Russian peoples.

"When I was eleven years old, a priest lived nearby, held services in Ukrainian and did not have altar servers. I found myself among the two peoples that I love. And not only me. First, Francis said that refugees from Ukraine are better received in the world than from other countries.

Before Catholic Easter, the Vatican decided to organize a symbolic reconciliation of Ukrainians and Russians. During the way of the cross in the Colosseum, a Ukrainian and a Russian woman had to carry the cross. The idea met with violent indignation in society among believers, as well as Ukrainian diplomats.

On August 24, Pope Francis declared that the daughter of the Kremlin ideologist Alexander Dugin, Daria, who was blown up in the Moscow region, is "an innocent victim of the war." Ukrainian Ambassador to the Vatican Andriy Yurash expressed his disappointment with the Pontiff's words.

On August 25, the Ministry of Foreign Affairs of Ukraine invited the Apostolic Nuncio to Ukraine, Archbishop Visvaldas Kulbokas, to express his disappointment with the words of Pope Francis about the death of Daria, the daughter of Kremlin ideologist Alexander Dugin.

On August 30, the Vatican reacted to criticism of Pope Francis, because of his words about the murder of the daughter of Russian propagandist Alexander Dugin - Daria. They emphasized that the words of the Pope should be interpreted as a voice of values, and not a political position.