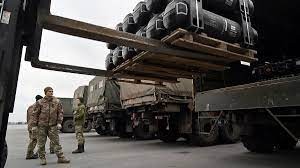 The US Department of Defense Criminal Investigation Service (DCIS) will begin checking military aid supplies to Kyiv. This is reported by Defense news on Wednesday, December 21.

FIS notes that, according to the service's first deputy director, James Ives, DCIS turned its attention to Ukraine because of "the Pentagon's hasty conclusion of many contracts and because of the fact that American aid could enter the black market."

“The real danger is because we are dealing with a huge mass of things, many of which can be used for military operations.. We are working very quickly on this issue," the official explained.

Portable systems like man-portable air defense systems (MANPADS) are of particular concern to the Pentagon's Office of the Inspector General, which controls DCIS, Ives added.

In September, he led a team of investigators on a trip to Poland, where there is a hub for the supply of foreign weapons and materials to the government of Ukraine.. Small teams at the office of the US military attaché in Ukraine are inspecting foreign aid routes around the country.

According to the publication, the US administration is stepping up checks on arms supplies to Ukraine before the Republicans, who won the majority in the midterm elections in the House of Representatives in January, get to work and put more pressure on the administration on this issue.

White House National Security Council spokesman John Kirby said in late November that the US administration is constantly monitoring how US military and other aid is being used by Kyiv.