The Red Cross collected data from about 1,800 defenders during the evacuation from Azovstal 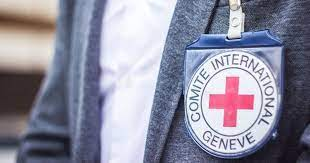 The International Committee of the Red Cross, during the evacuation of defenders from the Azovstal plant, documented the personal data of about 1,800 people.

This was stated by the Director General of the ICRC Robert Mardini at a press conference in Kyiv.

"During the evacuation of the defenders of Azovstal, we were able to register about 1,800 people, hoping that we would be able to visit them.. Unfortunately, we cannot do this," Mardini said.

He noted that in the case of the Azovstal plant, the ICRC facilitated the safe exit of combatants from its territory in cooperation with the parties to the armed conflict.

"We registered their details in the belief that the ICRC would subsequently receive permission to visit them.. But we cannot guarantee the safety of prisoners of war after they have fallen into the hands of the enemy, since it is simply beyond our ability to give such guarantees," the ICRC director general said.

Mardini said that at present, representatives of the organization he leads managed to visit only a few hundred prisoners of war from both sides.

"But we know there are thousands of others that we don't have access to yet.. We will continue to demand access to all prisoners of war, guided by our humanitarian obligations and mandate under the Geneva Conventions," Mardini assured.

The ICRC does not know the exact number of prisoners of war and will not speculate with figures. At the same time, Mardini noted that representatives of the organization "communicate daily to gain full access to prisoners of war."

"We constantly repeat publicly that it is the obligations of the parties to the conflict to provide the ICRC with access to prisoners of war ... We continue to discuss this at all levels of the official bodies of the Russian Federation and we also have a very constructive dialogue here in Ukraine regarding prisoners of war. But I cannot say that I am satisfied with the current situation, because there is a huge gap between what we can do and what we must do in accordance with the Third Geneva Convention," the CEO said.

Mardini declined to talk about the conditions of the prisoners of war visited by the ICRC, citing the confidentiality of such information.

“If we talked about it, we would not be given any access. That is why we cannot tell what we saw. But I can say that when we visit prisoners of war and see problems, our goal is to improve their conditions and change attitudes towards him". You can trust me that my colleagues are really working hard to provide decent conditions for prisoners of war and to ensure that the obligations of the parties to this international conflict are fulfilled," Mardini said.