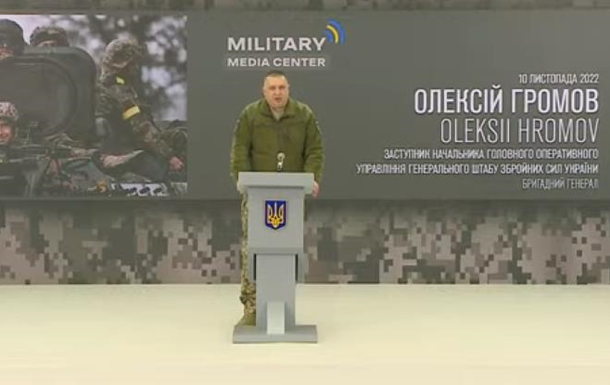 The forces of Ukraine cannot yet either refute or confirm the information about the so-called withdrawal of Russian troops from Kherson. This was stated at a briefing on November 10 by Deputy Chief of the Main Operational Directorate of the General Staff of the Armed Forces of Ukraine Alexei Gromov.

He noted that in the Kherson direction, the Ukrainian Defense Forces destroyed the logistical ways of supporting the enemy, violated his command and control system, "thus leaving the enemy no other choice but to take advantage of the flight."

"However, at the moment we can neither refute nor confirm the information about the so-called withdrawal of Russian troops from Kherson. We continue to conduct an offensive operation according to our plan. Expect official reports from the General Staff on the conduct of hostilities by the Armed Forces of Ukraine," Gromov stressed.

The representative of the General Staff recalled that behind every so-called "goodwill gesture" of the enemy, there are colossal efforts of Ukrainian soldiers.

"Just as the enemy left Kyiv, Kharkiv region, left Serpent's Island, the probable exit from Kherson is the result of our active actions," he said.

According to Deputy Defense Minister Anna Malyar, Ukraine does not trust the words of the Russian Federation about the withdrawal of troops from Kherson.

“The Russians cannot be trusted, we have seen this many times. The art of war, in particular, includes the art of deceiving the enemy.. On the other hand, from the point of view of propaganda, this is a demonstrative case, it is made in Russian traditions... everyone saw how this theatrical action takes place. Yes, these are the signals that the Russian Federation sends during the war to its consumers of information and out. But we remind once again that we do not trust the words of the Russian Federation," the deputy head of the Defense Ministry said at a briefing.