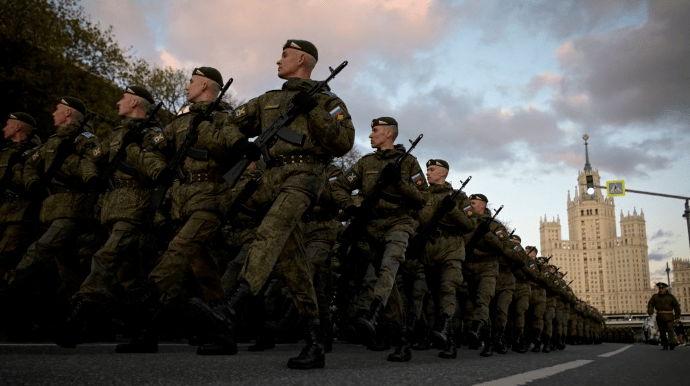 The command of the Russian Federation sends servicemen of non-Slavic nationalities to the most "hot" spots, discontent is growing among them.

This was announced by the General Staff of the Armed Forces of Ukraine in the morning report from the front.

It is noted that in connection with the losses, measures for forced mobilization in the temporarily occupied territories of Donetsk and Luhansk regions continue.

In the Volyn and Polesye directions , the rotation of units of the Belarusian Armed Forces involved in covering the border section continues. UAV reconnaissance is being carried out in the border areas. There is a threat of missile and air strikes from the territory of Belarus.

In the Seversk direction, the Russians continue to intensively guard a section of the Ukrainian-Russian border. The enemy fired mortars and artillery at the areas of the settlements of Nikolaevka in the Chernihiv region and the settlements of Zarutskoye, Zhuravka, Belopolye, Iskraskovshchina of the Sumy region. Enemy units continue to conduct aerial reconnaissance.

In the Kharkov direction, the enemy is conducting military operations to hold the lines. He carried out shelling from artillery of various calibers, in particular, not far from Ruskie and Cherkassky Tishki, Pitomnik, Borshcheva, Ruska Lozova, Chuguev. Enemy reconnaissance in combat in the area of the settlement of Uda completely failed. The invaders suffered losses and retreated.

In the Slavyansk direction , the enemy is trying to create conditions for the resumption of the offensive in the direction of Slavyansk. He made a fiery defeat from tanks, cannon and rocket artillery near Bolshaya Kamyshevakhi, Dolina, Chepil, Dibrovnoye, Novonikolaevka and others.

After an air strike near Gusarovka, the occupiers tried to launch an offensive against this settlement. Our soldiers met the enemy with heavy fire and drove the invaders back.

In the Kramatorsk direction , the enemy fired from cannon and rocket artillery in the areas of the settlements of Belogorovka, Bogorodichnoye, Kramatorsk, Raygorodok, Donetsk, Verkhnekamenskoye, Spirnoye, Starodubovka, Seversk, Dronovka and Ivano-Daryevka. Launched an air strike near Verkhnekamenskoye. The enemy stormed near Spirnoye, had no success, withdrew. He is trying to advance in the direction of Grigorovka, the fighting continues.

The enemy did not conduct active operations on the Avdeevsk, Novopavlovsk and Zaporozhye directions. Launched an air strike near Kamenka.

In the Yuzhnobuzhsky direction , the enemy is firing from a distance from tanks, cannon and rocket artillery along the line of collision, and is conducting aerial reconnaissance of UAVs. Continues to equip additional lines of defense.

The threat of missile strikes throughout Ukraine remains high.