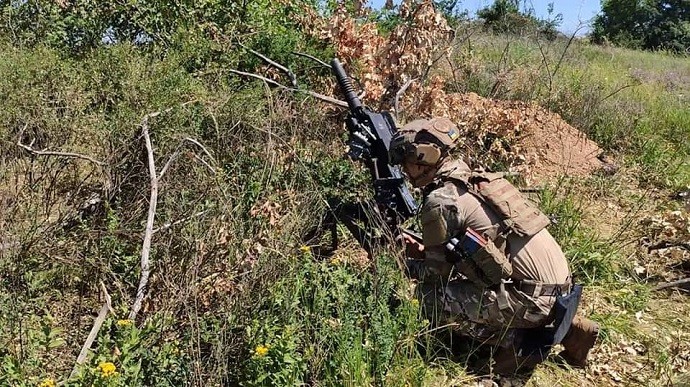 In the direction of the Dolina settlement in the Slavyansk direction, the Ukrainian defenders repulsed the assault and rejected the enemy.

This is reported by the General Staff of the Armed Forces of Ukraine.

In the Seversk direction, no signs of the creation of an offensive grouping were found. The enemy carried out mortar attacks in the areas of the settlements of Mkhi, Zhelezny Most in the Chernihiv region and Shalygino in the Sumy region. Inflicted an air strike from a Mi-24 helicopter on a school building near the village of Esman, Sumy region.

In the Kharkiv direction, the enemy is concentrating its main efforts on holding occupied lines and preventing the advance of Ukrainian troops.. The enemy fired artillery, multiple launch rocket systems and tanks at the areas of the settlements of Kutuzovka, Novoe, Russian Tishki, Malaya Danilovka and Dementievka. Launched an air strike on the city of Kharkov.

In the Slavic direction, the enemy carried out artillery shelling not far from Krasnopolye, Pervomaisky, Novaya Nikolaevka, Bogorodichny, Adamovka, Dolina, Mazanka, Dibrivnoye, Chepil and Mospanovoe. The assault of the enemy in the direction of the village of Dolyna was successfully repelled by Ukrainian soldiers. The invaders have been rejected.

In the Donetsk direction, the main efforts of the enemy are concentrated on establishing control over the territory of the Lugansk region within the administrative boundaries. The enemy is taking measures to restore the transport infrastructure in the rear areas.

In the Kramatorsk direction, the occupiers shelled the Belogorovka and Verkhnekamenskoye areas from barrel artillery. Launched a missile and air strike near Slavyansk and Zvanovka.

In the Bakhmut direction, the enemy is conducting assault operations in the direction of the settlement of Novoluganskoye, hostilities continue.

With the support of artillery and aviation fire, the aggressor resumed assault operations in the direction of the settlement of Spirne, with partial success, the fighting continues.

In the Avdeevka, Kurakhovsky, Novopavlovsky and Zaporozhye directions, shelling of positions of the Defense Forces with artillery of various calibers along the line of collision is recorded. The Russian occupiers attacked the village of Avdiyivka with aircraft.

Ukrainian aviation and rocket and artillery units continue to strike at enemy formations and concentrations of invaders, in particular, in the Kherson region.

"The Russian occupiers are demoralized and seek every opportunity to get slightly injured. They resort to self-mutilation and various simulations of poor health. Only to return alive to the Russian Federation," the General Staff said in a statement.