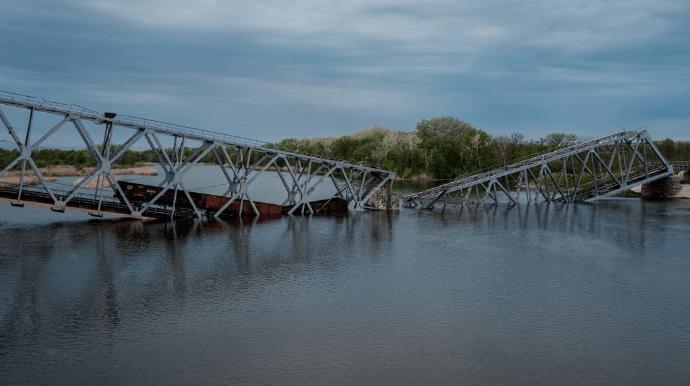 The invaders crossed the Seversky Donets after artillery preparation.

This is reported by the General Staff of the Armed Forces of Ukraine.

In the Kramatorsk direction, the enemy is entrenched in the areas of Lisichansk and Belogorovka.

In the Donetsk direction, the main efforts of the enemy groupings are to push our units to the line Seversk - Fedorovka - Bakhmut.

In the Bakhmut direction , the enemy intensified shelling of our positions from cannon and rocket artillery along the line of collision. Inflicted massive missile strikes in the areas of the settlements of Pokrovskoye, Berestovoye, Disputed and in the area of the Uglegorsk thermal power plant.

With the support of artillery, the enemy is conducting an offensive in the areas of Vasilievka, Berestovo, Disputed, Klinovo and Mayorsk, but is not successful.

On the Avdeevsky and Kurakhovsky directions, the occupiers stormed in the directions of Pobeda and Maryinka. Enemy aircraft launched rocket attacks on the eastern outskirts of Avdiivka and Maryinka.

In the Yuzhnobuzh and Tauride directions, the Russians are focused on regaining lost positions in the areas of Ivanovka, Potemkino and Mirnoye and preventing our counteroffensive in the Kherson and Nikolaev regions. The enemy is improving the engineering equipment of positions in the Novovoskresensky area.

From the temporarily occupied Crimea to the railway station "Kalanchak" in the village of Mirnoye, Kherson region, the Russians moved 17 wagons with ammunition.

On the Volynsky, Polessky and Seversky directions without significant changes. On the latter, from the territory of the Kursk region, the aggressor used artillery and helicopters of army aviation to destroy the positions of the defense forces in the areas of the settlements of Vasilyevskoye, Belopolye, Bachevsk and Volkovka of the Sumy region.

In the Kharkov direction, the enemy is concentrating efforts on pinning down the actions of our troops and preventing them from going on the offensive.. In the direction of Prudyanka, Ukrainian soldiers suppressed an enemy assault attempt.

To disrupt the command and control system of our forces, the enemy is actively using electronic warfare systems.

In the Slavyansk direction, the Russians are trying to establish control over the Bogorodichne, Mazanovka and Dolina settlements. The fighting continues.

The enemy is regrouping troops to resume the offensive. For this, the BTG was moved from the Izyum region in the direction of Snezhkovka, and additional barrel artillery units were deployed.

In the Novopavlovsk and Zaporozhye directions, the enemy is exerting systematic fire influence in order to pin down units of the Defense Forces and prevent their transfer to other directions.

Three carriers of sea-based cruise missiles of the Caliber type are in readiness for the use of missile weapons in the Black Sea .