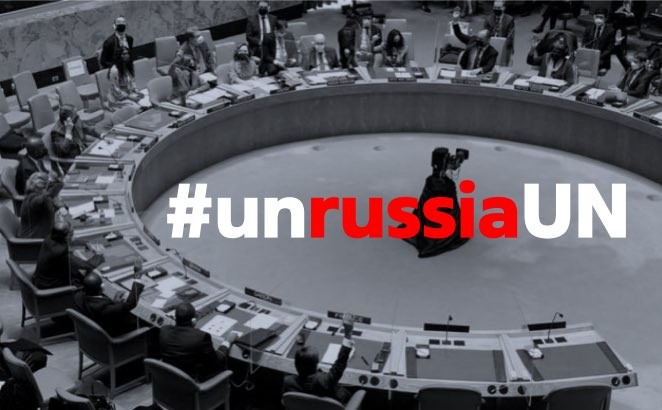 The United Nations, created to prevent all kinds of wars, still includes Russia, which has violated all charters, all laws, all agreements within this organization.

According to the lawyer and co-founder of the Initiative Group "Down with Russia from the UN" Maxim Baryshnikov, the terrorist state of Russia has no legal grounds for being in the United Nations. After all, Russia is not a founding country of the organization and has not gone through the procedure of joining it, which means that it has no legal grounds to be considered a member.

Maxim Baryshnikov focuses on the fact that Russia became a member of the UN on the basis of a fake letter that Boris Yeltsin wrote on December 24, 1991 to the then UN Secretary General Perez de Cuellara, in which the state was named differently three times. In this letter, Yeltsin turned to the Secretary General on the basis of the mythological "Alma-Ata papers", the legal meaning of which no one studied in detail, with a request to fill a seat in the UN and the Security Council of the former USSR.

Baryshnikov recalls that there are several ways to remove Russia from the UN - through the decision of the International Court of Justice or through procedural means - during the annual confirmation of the participation of countries in the General Assembly. The relevant UN bodies may not approve the credentials of the Russian delegation, since there are no documents, at least public ones, confirming its membership.

Consequently, there can be no question of any exclusion of the Russian Federation from the UN, they just need to be thrown out as those who are absolutely groundlessly located there among the member countries.

In addition, according to Thomas Grant, an authoritative international lawyer, a professor at the University of Cambridge and a member of the “Public Hub” initiative group, neither the Russian Federation nor Belarus meets the above criteria for membership in the UN, since the latter helps and assists Russia in its aggression against Ukraine and thereby discredited myself.

Thus, Ukraine is the only initial member of the UN that remained true to the principles of the organization and was part of the USSR. Therefore, it is Ukraine, and not the Russian Federation or Belarus, that has serious claims to membership in the UN Security Council instead of the USSR.

The initiative group "Public Hub", which includes experts in international law and foreign policy experts, created an international petition Kick Russia out of the UN! (“Down with Russia with the UN!”, hashtag #unrussiaUN) on the change.org platform, demanding that UN Secretary-General António Guterres provide documents certifying the legal grounds for Russia's membership in the UN. In the absence of such documents, the petition contains a demand to stop the fictitious membership of Russia in the UN.

Support the initiative! Sign the petition! "Get Russia out of the UN"
Perhaps it is your signature that will be decisive!