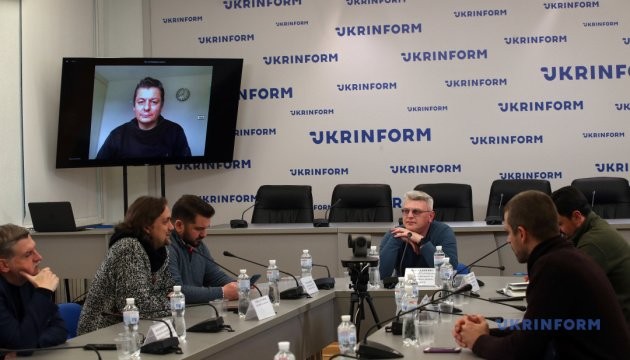 A round table was held at Ukrinform, where political experts discussed the possibility of a new Russian offensive against Ukraine from the territory of Lukashenka's Belarus.

Belarusians will be "cannon fodder" or policemen

Opening the discussion, the head of the NGO "Agency for the Development of Democracy and Information Freedoms" Yuriy Fedorenko noted that now there are two scenario plans for the development of events.

"One of the scenarios in Belarus is that they simply divert attention from the events that are taking place in the East of Ukraine.

Relocation of the tank army, which we practically smashed to smithereens near Kharkov. Something like maneuvers. But this is one possible scenario.

And another likely scenario is really the beginning of a large-scale campaign by Belarus."

Military personnel from Belarus can be used in the territories of Ukraine temporarily occupied by the Russian Federation to carry out "stabilization measures."

This was announced by the chairman of the Free Belarus Charitable Foundation Aleksey Frantskevich.

"We have information that the Russian Federation will put pressure on Lukashenka in order to draw Belarusian soldiers into the war. We are talking about a contingent of 10-15 thousand soldiers from the Republic of Belarus, who will be brought to the already occupied territories for certain stabilization measures," he said.

According to Frantskevich, there are no prerequisites for a direct land invasion yet. According to him, the Russian Federation does not have enough troops to invade the territory of Ukraine.

Leader of the International Movement "Speak Louder!" Russian oppositionist Andrei Sidelnikov also considers a land invasion from the territory of Belarus unlikely, although he does not exclude such a possibility. The most realistic scenario, in his opinion, is the further use of the Belarusian military infrastructure by the Russian Federation.

"If, nevertheless, the offensive occurs, then the Belarusian soldiers will become" cannon fodder "for demining the territory. They will hide behind them in order to enter Ukrainian territory," he said.

Belarus is extremely important for Ukraine

The future of Belarus is very important for the future of Ukraine. This opinion was expressed by the executive director of the Northern Eurasia Transformation Institute Vladimir Gorbach.