Oleg Tverd, editor of the New Ukrainian School website, complained about the Kyiv driving school AvtoMag for refusing to serve him in Ukrainian.
The man left an application on the website of the driving school, after which the head of the branch contacted him. However, later a language dispute arose between them, because the driving school offers training only in Russian.

“I signed up for driving courses at the MAG Driving School. It turns out that they only teach in Russian.. To the fact that I don’t want to learn driving in Russian, the director Irina replied with rudeness: “Successful learning on the move,” wrote Oleg Tverd.

The man published a screenshot of the correspondence with the head of the Pechersk branch, Irina Muschinskaya. 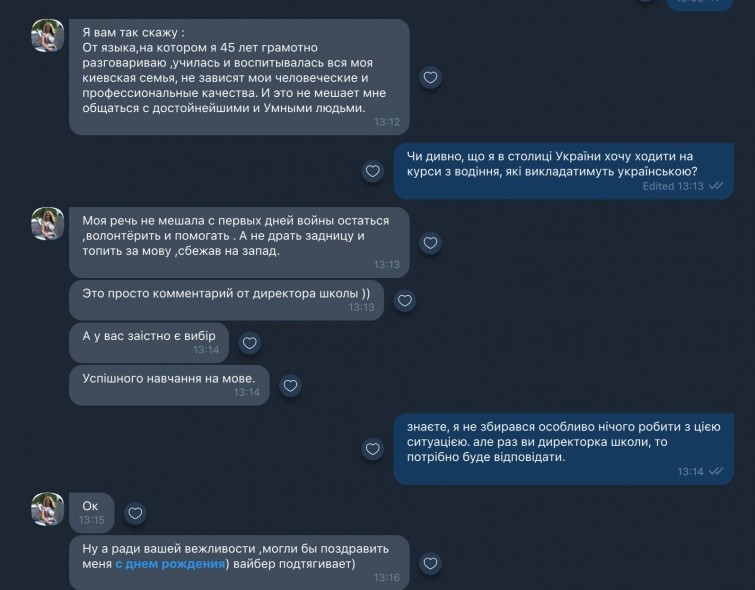 Oleg Tverd said that he left a complaint about the violation of consumer rights on the website of the Commissioner for the Protection of the State Language.
Subsequently, Tverd added that he received a phone call from Irina, who is the director of the branch of the school in Pechersk.

"Apologized for my words. The manager of another branch of the school also wrote to me, apologized for her colleague and offered to study with her - she wrote in Ukrainian," Tverd wrote.

Later, the director of the driving school contacted Oleg, apologizing for the incident.

"Dear Mr. Oleg, brothers and friends!!! I am addressing you, the director of the AvtoMAG Driving School - Oleg Nikolayevich Gnatyuk, defender of the Motherland! Now I am at the front. I apologize for this unfortunate incident, I ask you not to dishonor the name of my large team, a number of which are now directly next to me, and the enterprise, under difficult circumstances, supports the Armed Forces of Ukraine with volunteer help and brings the time of Our victory closer, I apologize again, Glory to Ukraine! director of the driving school Gnatyuk Oleg.