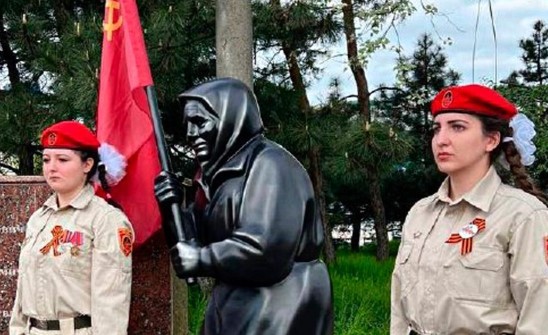 Russian invaders in the temporarily occupied territories of the Kherson region are forcing Ukrainian youth to join pro-Russian organizations in order to create a picture of "massive support" by local youth for the occupation regime.

This was reported by the Main Directorate of Intelligence of the Ministry of Defense of Ukraine.

“The occupation administrations in the temporarily occupied territories of Kherson are trying to instill a pro-Russian worldview among Ukrainian youth. One of the main elements of this policy was the so-called "military-patriotic education," the GUR notes.

“In order to create an idea of the mass support of the occupation regime by local youth, participation in the project organized by the Ministry of Education of the Russian Federation is actively promoted.. The "Federal Agency for Youth Affairs of the Russian Federation" announced the holding of all-Russian children's and youth competitions "Planet of Big Changes" and "Big Change" in the occupied territories," the GUR adds.

In addition, on July 31, members of the Yunarmiya from the so-called "DPR" will take part in the main naval parade in St. Petersburg.
Recall that the Yunarmiya was created in 2016 at the initiative of Russian Defense Minister Sergei Shoigu. In addition to teamwork skills, they are preparing for service in the Armed Forces of the Russian Federation.

In Crimea, the organization appeared, as in Russia, in 2016. According to the press service of the Russian Black Sea Fleet, as of 2021, 29,000 children entered the ranks of the Youth Army in Crimea, that is, every tenth student of the peninsula.

Children 8-18 years old can get into the Yunarmiya at the request of their parents. Propaganda TV channels in ORDLO and Crimea tell motivating stories about children who train in the Yunarmiya. In the video, they work out an anti-terrorist operation - freeing hostages, capturing terrorists or “not handing over information”, being captured, demining the territory.

Yunarmiya members who are 18 years old receive letters of invitation for an interview in connection with the start of conscription in Russia.