Ukrainians in Poland have chosen social networks as the main source of news about their homeland - they make up more than two thirds of all involved sources of information.

This is evidenced by the results of the study "Media consumption and social activity of Ukrainians who have found temporary shelter
settlers in Poland. 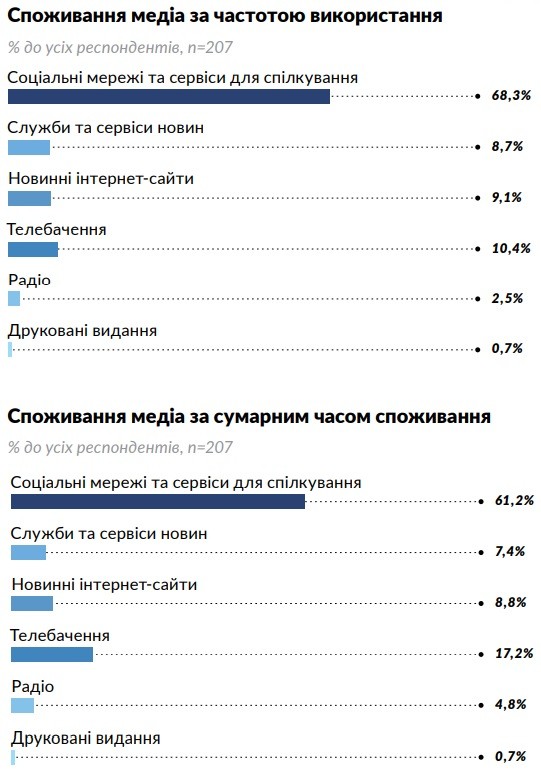 "Facebook is used by 56% of respondents, as the main source - 15%. The advantage of this social network is the automatic selection of information, the disadvantage is the long time between the publication of the news and its entry into the feed," the researchers write.

44% use Instagram for news consumption, 7% use it as the main source. It attracts with its efficiency and conciseness, as well as the personalization of publics, involvement in the personal life of users, the study says.

News sites (including news services such as Google, ukr.net, unian.net, etc.) are used by 18% of survey participants. This source also owns 16% of the total time of information consumption.

Television was chosen by 10% of respondents, its share in total consumption is 17%. Barriers to free access to this media include:
Most of the news consumption falls on the United News telethon - 60%.

Radio is preferred by 3% of respondents (5% of the total time of news consumption). More often it is used as a background - for example, during monotonous work or driving.

Print media were chosen by less than 1% of respondents, and they also own less than 1% of consumption time. They are perceived as something outdated, the researchers emphasized.