Russian propagandist staged a stand-up with a skull, which, according to him, belongs to the military from Azovstal 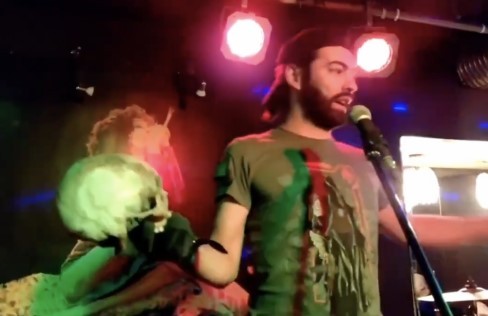 Russian propagandist Igor Mangushev performed at the club with stand-up. During his speech, he waved a human skull, which the militant allegedly took as a trophy at Azovstal, according to him, these are the remains of a Ukrainian military man.

"We are still alive, but this dude is already gone. Let him burn in hell. He was unlucky, and a goblet will be made from his skull, maybe ... Why can't there be any reconciliation? Ukraine must be de-Ukrainized. Russian lands of Little Russia must be returned back. We are not at war with people, we are at war with an idea," Mangushev said.

The Russian frankly admits that the main goal of the war is to erase national identity and kill everyone who considers himself Ukrainian.
It is noteworthy that the audience supports the propagandist, applause is heard.
Mangushev's statements are already being actively circulated on Twitter by world leaders, calling such statements shameful.

"Disgusting. I hope all the so-called "realists" watch this video and then try again to explain to us how this war is just a defensive/preventive/rational/logical "special military operation" to stop NATO expansion, and has nothing to do with with imperial ideas and identity," U.S. diplomat Michael Anthony McFaul tweeted.

After the speech of the Russian propagandist Mangushev, the Commissioner of the Verkhovna Rada for Human Rights, Dmitry Lubinets, turned to the head of the fact-finding group of the UN Investigative Commission for Ukraine Ole Solvanga and the Office of the Prosecutor General.
Lubinets passed on the information to Solvang and stated the need to record the facts of war crimes, which include Mangushev's speech and statements.

“Let me remind you that when people die in war, their bodies must be treated with respect and dignity, regardless of whether the deceased is a civilian or a member of the military.. The remains of the unknown must be identified. Respect for the dead is not just humanism and concern for the loved ones of the dead. These are international standards, the implementation of which guarantees that the dead will not add to the list of missing people,” he said.

According to the Ombudsman, with the help of its propagandists, the Russian Federation continues to dehumanize the Ukrainian people, justifying mass civilian killings and destruction of settlements. Thus, the demonstration of the "remains" of the dead defenders of Mariupol became an occasion for a "stand-up on a military theme." The only purpose of such actions of Russia is another infliction of pain on the relatives of the dead and missing, Lubinets stressed.
It is known about Igor Mangushev that he is the leader of the Russian nationalist movement "Light Russia", the likely creator of a private military
company ENOT Corp, which arose after the merger of right-wing Russian organizations, the leader of one of which he was. The militant participated in the battles in the Donbass from Russia.

His crimes were investigated by the Russian project "Database", for which he threatened the authors of the project to kill or torture them.

The Meduza publication found out that Igor Mangushev may be the author of the Z symbol, which denotes the Russian military invasion of Ukraine.

The Insider writes that Mangushev also works for the Safe Internet League, an organization of Russian businessman Konstantin Malofeev.