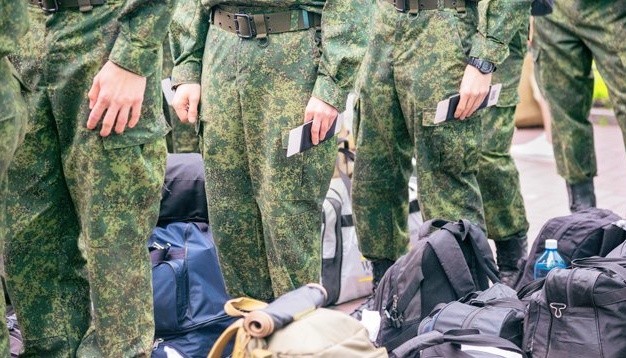 In the temporarily occupied Luhansk region, 55% of men have already fallen under forced mobilization into the troops of the invaders.

Vice Prime Minister Irina Vereshchuk spoke about this during the national telethon.

Vereshchuk called those who were forcibly mobilized cannon fodder and noted that those who remained should leave the occupied territories as soon as possible, because minors are already being recruited into the ranks of enemy troops.

“Already 55% of the male population of the “LPR” quasi-formation have become cannon fodder. They talk about this inside, we know this from our intelligence report. This is at least 55%, and this process continues ... Even 16-year-old children are also attracted: they will bring shells, they will be “cooks in the canteens” - I am now quoting their interceptions, because I know, I have information. Even 65-year-olds are forcibly driven away, knowing that they have not held weapons for many years and do not know how to use them, and they will definitely die in the first clashes, ”says the Deputy Prime Minister.

In the summer, human rights activists began to record the activation of a new wave of forced mobilization in the occupied territories of Donbass and Lugansk region. The men who surrendered said that the militants resorted to various methods to look for evaders, for example, according to one of the prisoners, they set gas leaks in houses to catch men who go out into the street.
Due to forced mobilization in the Luhansk region, some mines are on the verge of closing. During the period of forced mobilization in ORDLO, which began shortly before the full-scale invasion, the militants managed to raise the age from 55 to 65 years of age forcibly taken to war. In total, their number is estimated at more than one hundred thousand people, and almost 18 thousand more could die..

Recall that forced mobilization is a war crime. Defense Minister Aleksey Reznikov earlier urged residents of the occupied territories to avoid it, and if this is not possible, try to lay down their arms as soon as possible. In the instructions for surrendering, it was noted that soldiers who surrendered or were captured would not be convicted for the mere fact of serving in the occupying army.

At the same time, according to national legislation, those men who voluntarily accepted the ranks of the enemy can be tried in Ukraine for high treason, international humanitarian law does not prohibit this.. If a man from the occupied territories was forcibly mobilized, then, first of all, he should be considered as a victim of a war crime under article 438 of the Criminal Code (“Violation of the laws and customs of war”).