U.S. Ambassador Bridget Brink donated about UAH 22 million worth of protective clothing and a Weber rescue tool to the State Emergency Service of Ukraine (SSES).

According to the State Emergency Service, this assistance came as part of the cooperation of the Ukrainian Rescue Service with the United States Agency for International Development (USAID) and the project "Improving the performance and accountability of local governments" (GOVERLA).

Transferring aid, the ambassador stressed that the United States of America would remain with Ukraine for as long as it would take for a complete victory over the Russian Federation.

Deputy Interior Minister Yevgeny Yenin responded by thanking Brink and the entire American people for their unprecedented assistance.. He noted that the State Emergency Service of Ukraine has one of the highest levels of trust in Ukrainian society, and this is quite deserved, because the range of its work is extremely wide - from mine clearing of territories to the evacuation of the civilian population, dismantling the rubble of buildings destroyed as a result of enemy shelling and extinguishing large-scale fires caused by hostile aggression on a wide variety of infrastructure facilities, for example, oil depots, chemical enterprises, etc. 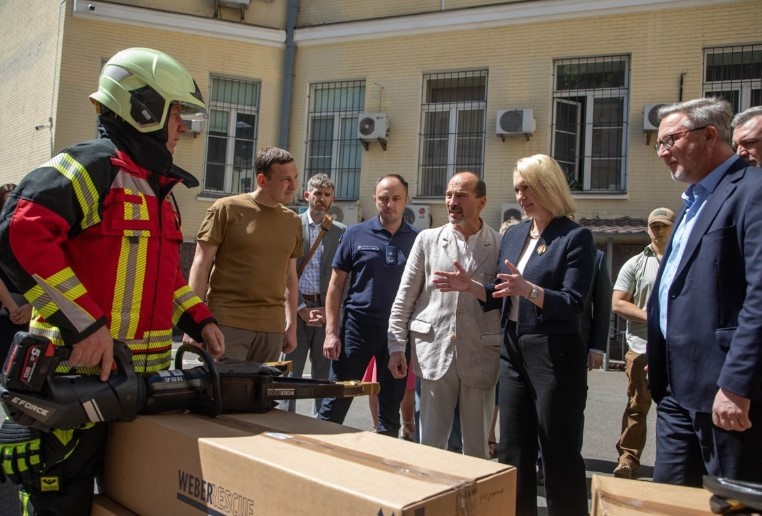 “Therefore, on my own behalf and on behalf of the entire State Emergency Service of Ukraine, I am sincerely grateful in your person to President Biden, the United States Congress, all the American people for world leadership in supporting our state, for your clear position. We are grateful for the support of the State Emergency Service. I can assure you that ordinary firefighters are well aware of the level of your help, they realize that without the support of our partners, it would be a hundred times more difficult for the rescue service to eliminate the consequences of enemy aggression and, over time, after our victory, create a new safe space in Ukraine," the head of the State Emergency Service emphasized.

The Ministry of Education has developed four models of...

Modular housing for 350 people will be built in Vasilko...

More than 90% of Ukrainians trust the military and vete...

More than 40% of schools are ready for the academic yea...

Ukraine updated the school curriculum: what has changed

Modular housing for 350 people will be built in Vasilko...

Ukraine updated the school curriculum: what has changed

The Ministry of Education has developed four models of...

More than 90% of Ukrainians trust the military and vete...

More than 40% of schools are ready for the academic yea...