Speaker Nancy Pelosi's Asia visit does not include Taiwan 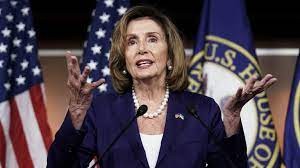 On July 31, the House of Representatives of the US Congress published an official press release dedicated to the visits of Speaker Nancy Pelosi as part of the American delegation to the countries of the Indo-Pacific region. The document says that Pelosi will visit Singapore, Malaysia, South Korea and Japan, but there is no information about her visit to Taiwan.

The purpose of the visit of the American delegation, headed by Pelosi, is to discuss the topics of mutual security and economic cooperation between the United States and these countries.

According to Pelosi, after landing in Hawaii and refueling the aircraft, the delegation visited the memorial to the American battleship Arizona at Pearl Harbor, which sank during the December 7, 1941 Japanese attack during World War II.

"It is a great honor for me to lead this delegation, which includes the chairmen of committees and subcommittees of the US House of Representatives. We look forward to productive meetings as a result of which we advance American values and interests to strengthen partnerships in this region," Pelosi said.

As previously reported, China stepped up artillery and aircraft due to a possible visit by Pelosi to Taiwan.. Before starting her tour of Asia, Nancy Pelosi did not confirm the information spread by the US media that her delegation was planning to visit Taiwan. However, the speaker of the House of Representatives spoke about the need for the US to show its support for Taiwan.

China considers Taiwan its territory, and the activation of the movement of military equipment could be a kind of signal for the United States.

The Chinese army urged to take up arms because of Pelosi's visit to Taiwan. The 80th division of the People's Liberation Army of China published a message that it is necessary to prepare for war on the Chinese social network Weibo.

According to the New York Post, a Chinese government spokesman tweeted that China could retaliate militarily if U.S. warplanes escort Pelosi on board during her proposed visit to Taiwan.. This post was later deleted. According to the official version, due to the blocking of the entire account of the Chinese official.

The Chinese Foreign Ministry threatened the US with "strong steps" if Speaker Nancy Pelosi visited Taiwan, but the US said it did not see China's impending military activity against Taiwan.