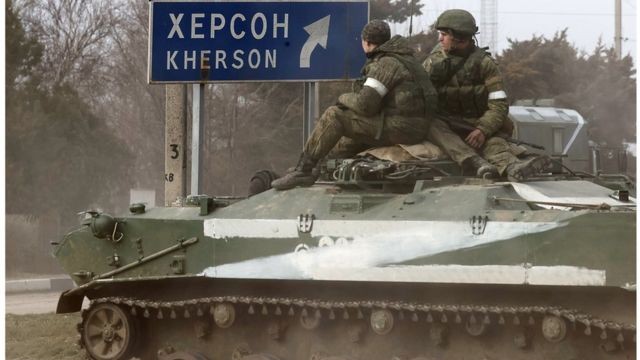 As reported today, July 24, by the British Ministry of Defense on its Twitter page, "the expansion of the geography" of Russia's war against Ukraine, as stated by Russian Foreign Minister Sergey Lavrov, is not happening.

It is noted that now the small offensives of the invaders in the Donbass remain concentrated in the Bakhmut direction, but achieve "minimal progress."

"Russian Foreign Minister Sergei Lavrov said that Russia had expanded the geography of its "special military operation" beyond the self-proclaimed "LDPR". He argued that the operation now included new additional areas, including the Ukrainian Kherson and Zaporozhye regions due to the fact that Western countries supply long-range weapons to Ukraine.This is probably not true. Russia has not "expanded" its war.

According to intelligence, the capture of these territories of Ukraine was already probably the initial goal of the Russian invasion.

"Russia invaded these territories in February, and the occupying authorities have been publicly discussing the prospects for "referendums" since at least mid-March," the report says.

That is, as British intelligence admits, there is a real possibility that Lavrov, with his statement, paved the way for holding referendums in the occupied territories outside Luhansk and Donetsk.

Recall that Dmitry Medvedev, deputy head of the Russian Security Council, also joined Lavrov’s statements.. He said that the Russian Federation supposedly needs to "push Ukrainian troops" not only from the temporarily occupied Donbass, but also away from these territories.

Later, Ukrainian intelligence explained that the aggressor's statements that the Russian Federation was "changing the geography" of the war indicated the enemy's intention to resolve the so-called "status" of the occupied territories of Ukraine - the Zaporozhye and Kherson regions.

In Finland, they changed their minds about building a h...

In the elections to the State Duma of the Russian Feder...

In the elections to the State Duma of the Russian Feder...

In Finland, they changed their minds about building a h...