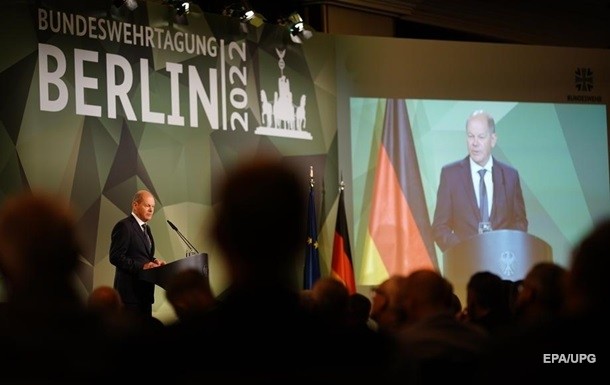 Today's Russia is the main threat to the NATO countries and peace in Europe.

This was stated by German Chancellor Olaf Scholz at a conference of the Bundeswehr in Berlin on Friday, September 16.

"Putin's Russia is currently the biggest threat to NATO. Through a war against Ukraine, a heavily armed nuclear power is trying to redraw the borders in Europe. If Russia gets its way, peace in Europe will be lost for a long time. Only those who do not listen and do not read what President Putin says and writes can doubt this," the German Chancellor said.

According to him, the German Armed Forces should be best equipped in Europe, and Germany itself should become a leader in ensuring European security.

“The Bundeswehr should become the foundation of non-nuclear defense in Europe and the most well-equipped army in Europe ... Our country has long avoided setting true priorities for the Bundeswehr. Drilling wells, guarding humanitarian aid, dealing with the consequences of floods, helping with vaccinations in times of a pandemic - all this can such a good army as the Bundeswehr, but this is not its key task. Its key task is to protect freedom in Europe," Scholz said.

He urged the countries of Europe to take on much more responsibility in NATO and again promised that Germany would fulfill the obligation to allocate 2% of its GDP to defense needs.

Olaf Scholz also spoke in favor of strengthening cooperation with NATO partners in the development of new weapons systems. He expressed his readiness to ease tough export restrictions in Germany, which critics say hinder the expansion of such cooperation.