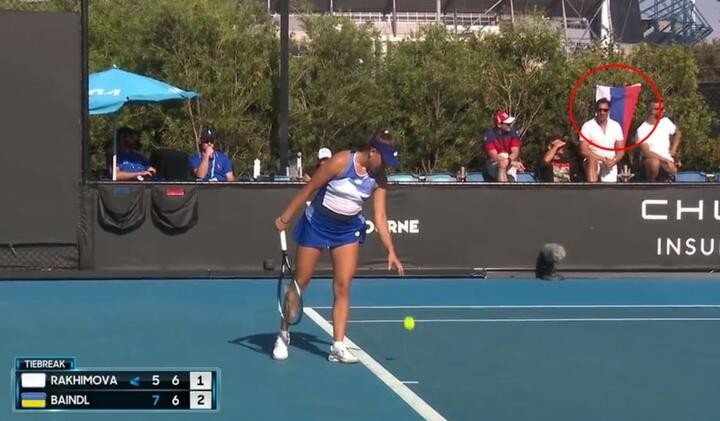 The organizers of the first tennis grandslam of the season - the Australian Open - banned the flags of Russia and Belarus from the tournament. The decision of the Australian Tennis Federation (Tennis Australia) is reported by Reuters.

In the first round of the major in Melbourne, Russian flags were present in the stands during a number of matches. In particular, with the symbols of Russia, a group of people came to the game between Ukrainian Ekaterina Beindl and Russian Kamilla Rakhimova, among whom one spectator had a T-shirt with the image of Russian President Vladimir Putin.

Ukraine's ambassador to Australia, Vasily Miroshnichenko, condemned these actions and urged the organizers to "immediately apply the 'neutral flag' policy."

Beindl herself said she was "surprised" by the situation and called it "a very strange story."
“I was just trying to distract myself from this provocation, not to enter into a conflict, because for me the priority was to win over my opponent in the game, ” the Ukrainian responded to the incident.. “I did everything to stay in the cocoon, so as not to wind up.”
How the complaints from Ukraine were reacted at the tournament
Tennis Australia has introduced a ban on the use of Russian and Belarusian flags on the territory of the tournament, which previously only applied to tennis players from these countries: they can participate, but in a neutral status.
“Our initial policy was that the fans could bring them with them, but they could not use them to create conflict. There was an incident when the flag was hung at the court, ” the organizers explained. “ The ban takes effect immediately. We will continue to work with the players and our fans to provide them with the best environment possible to enjoy tennis."