Estonian Foreign Minister sent a "gift" to The Hague for Prigozhin Estonian Foreign Minister Urmas Reinsalu sent a "gift" to The Hague for the founder of PMC Wagner, close to Putin Yevgeny Prigozhin. This is how the politician on Friday, November 25, reacted to Prigozhin's promise to send a sledgehammer with sham traces of blood in a violin case to the European Parliament.

“Since we witnessed how the Russian mercenary Prigozhin sent his bloody sledgehammer to the European Parliament, I would like him to accept our little gift that is waiting for him in The Hague,” he wrote on his Twitter.

Handcuffs were prepared for Prigozhin.

"I will send these handcuffs to the headquarters of the International Criminal Court in The Hague, where they will be waiting for Prigozhin and his henchmen for crimes committed in Ukraine," Reinsalu wrote. 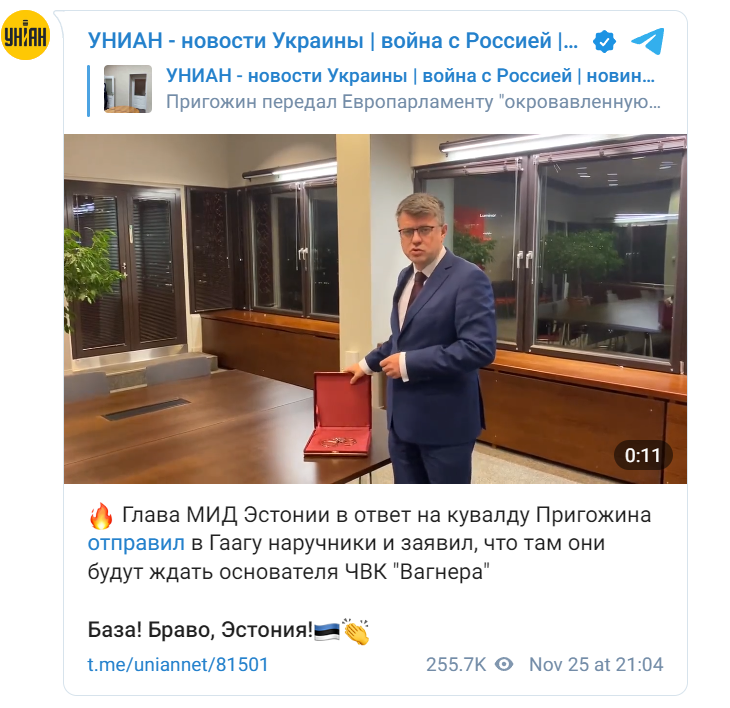 The sledgehammer became associated with the PMC Wagner and the extrajudicial executions carried out by its members during the war in Syria. So, in 2017, they filmed how a man was beaten to death with a sledgehammer.

Also, Russian social networks published a video of the execution of the former prisoner of the Ryazan IK-3 and a member of the PMC Wagner Yevgeny Nuzhin, who, after being sent to war with Ukraine, surrendered to the Armed Forces of Ukraine. The footage shows how the man's head was smashed with a sledgehammer. Later, Russian publics published an alleged commentary by Yevgeny Prigozhin, the founder of the ChKV Wagner, in which he admitted that it was his mercenaries who committed the massacre with a sledgehammer against a man.