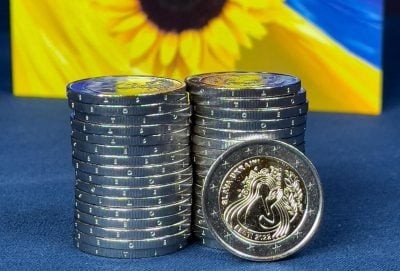 Estonia will issue two million two-euro coins with a commemorative theme of Ukraine and freedom.

This was reported on December 20 by the Official Journal of the European Union.


The coin depicts the silhouette of a woman holding a bird in her hand, with an ear of wheat. Top left text SLAVA UKRAINI'. At the bottom left is the name of the EESTI issuing country and the year of issue 2022. The 12 stars of the European flag are depicted on the outer ring of the coin.

It is noted that euro coins intended for circulation have the status of legal tender throughout the euro area.

"In accordance with the Council's conclusions of 10 February 2009, eurozone member states and countries that have concluded a monetary agreement with the European Union providing for the issuance of euro coins may issue euro commemorative coins intended for circulation, subject to certain conditions, in particular for use only the denomination of 2 euros. These coins have the same technical specifications as the other €2 coins, but their national obverse has a commemorative design that is highly symbolic from a national or European point of view.