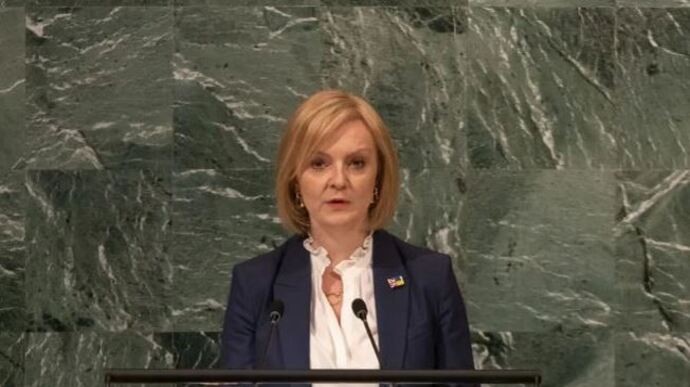 According to The Guardian, she said this in a speech at the UN General Assembly.

Liz Truss at the beginning of her speech noted that now geopolitics has entered a new era and this requires adherence to principles and a decisive position from countries that believe in the fundamental principles of the UN.

"This morning we saw how. He decided to continue the effort, sending more reservists to a terrible fate. He is desperately trying to create the appearance of democracy for a regime for which there are no human rights and freedoms. He resorts to new bogus claims and saber rattling. It won't work," Liz Truss said.

She also promised to maintain and increase military support for Ukraine for as long as necessary.

The Prime Minister of Britain called on the leaders of countries not to make any compromises in favor of the Russian Federation, despite the difficulties due to sky-high energy prices.

She devoted a separate part of her speech to the confrontation between democratic and authoritarian state models, noting that democracies, in order to prove their viability and advantage, must find a way to provide welfare and security for their citizens..

Before that, Truss, in a joint statement with the President of the European Commission, called Putin's decision to mobilize evidence of the failure of the Russian invasion of Ukraine.