It is worth noting that the dialogues between the leaders of the countries are built around common interests. If there are none, then no one will contact just for the sake of small talk.

Undoubtedly, Ukraine is interested in seeing as many states as possible refuse trade with Russia, since its ability to restore its military equipment and allocate money for the war depends on this. Among Western leaders, Zelensky enjoys great popularity. They simply cannot ignore it, even if they wanted to, since the population of their countries will not forgive them for this and are unlikely to vote in future elections for those who refused to help Ukraine.

With China, the situation is different. As the United States' main rival, Beijing is playing its own game. It is extremely important for him to observe what is happening both on the battlefields in Ukraine and how the West reacts to Russian aggression.. At the same time, China remains more in a neutral position than on anyone's side. For China, on the one hand, the conflict in the center of Europe is even beneficial, since the United States spends its resources on supporting Ukraine, which means that it becomes weaker than Beijing.

However, Zelensky decided to "directly contact China to stop the Russian invasion," according to Western media. For the President of the People's Republic of China, Xi Jinping, the Ukrainian president probably does not matter. The chance of contact is very small. Moreover, Ukraine is unlikely to be able to offer China an equivalent exchange for the Russian market. 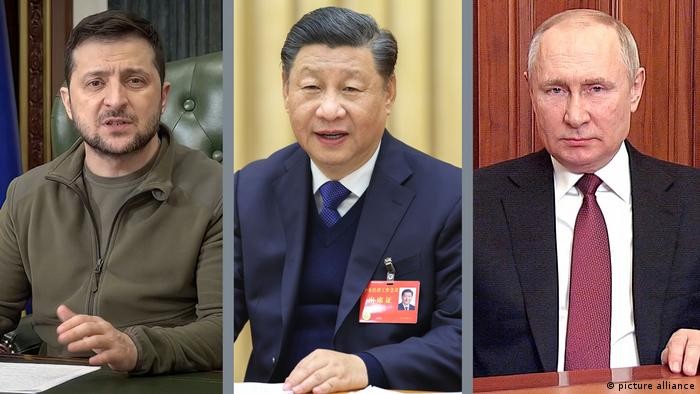 At the same time, Zelensky’s very statement that he is “directly ready to contact” Xi Jinping, bypassing the United States or other intermediaries, sent directly to the PRC chairman, is a “spit” in Putin’s face. The Kremlin positions itself as China's "big and main ally". However, it is not. The President of Ukraine clearly outlined the essence of the upcoming conversation, and Beijing's reaction should be in any case.

The escalation around Taiwan gives Zelensky's ambitious request a chance to succeed. Firstly, if China refuses, this will mean that it, at least indirectly, supports Russia in its aggression against Ukraine, although it has repeatedly assured the opposite.. This will enable the US to announce the creation of a working group to develop a package of sanctions against Beijing, including due to the escalation in Taiwan. Secondly, despite its threats to “shoot down the American senator's plane”, start a war against America, etc., China did not keep its promise and the whole world drew attention to this. Xi Jinping has lost some of his political capital, showing that his threats to the US are worthless. Zelensky’s specific proposal to finally take part in the conflict, which involves the world’s first economies, will provide China with a chance to rehabilitate itself a little on the world stage, as well as de-escalate the situation with America, which also does not want to exacerbate the overdue crisis at the moment. Thirdly, if the dialogue does take place, regardless of its outcome, it will show Putin that behind his back, his so-called “main ally”, is discussing options for joining the sanctions against Russia directly with Ukraine. With a country that his propaganda calls "a puppet of the West."

Zelensky chose the right time to put forward such an offer to China. In any case, he does not lose anything, however, at the same time, he puts a “fork” at once on two totalitarian regimes of a world scale.