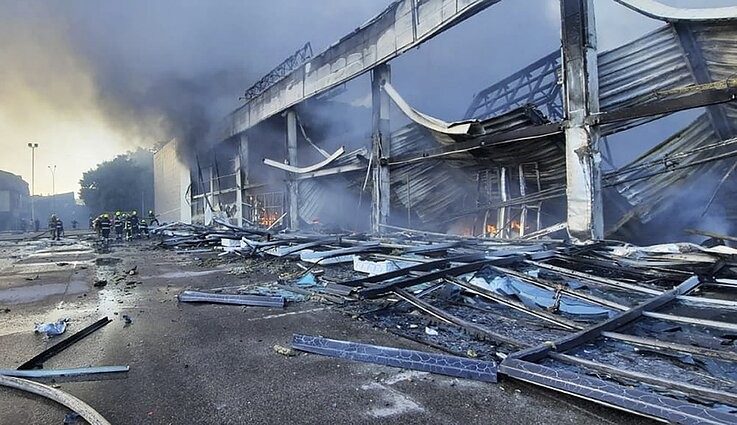 On June 27, one of the X-22 cruise missiles fired from a Tu-22 M3 strategic bomber in the Kaluga region hit the Amstor shopping center in Kremenchug. In the first minutes after that, on the official sources of the President of Ukraine Volodymyr Zelensky, a statement was published that up to 1,000 people could be under the roof of the building. At the moment, more than 20 dead, 59 injured and at least 40 missing persons reports received from relatives of unfound people are known.

The city is far from the front line.There were no military facilities or concentrations of Ukrainian troops within a radius of several kilometers. The shopping center was located in the central part of the city.

. You can see that there are other shops, residential buildings, a stadium, etc. in the area, but not military facilities." width="646" height="413" />

Location of Amstor shopping center in Kremenchug. You can see that there are other shops, residential buildings, a stadium, etc. in the area, but not military installations.

In addition, in a few days, the increased shelling of Rashists with similar missiles hit civilian targets in other cities of Ukraine. It should be noted that cruise missiles are not field artillery.. They are aimed exactly at the target and have a small deflection radius, so that when they hit, the explosive power of the warhead could still hit the target, even if the missile did not hit the planned point. That is, Russia deliberately aimed missiles at civilian buildings in Ukraine. The terrorists do the same.

Terrorists hit civilian objects with a large crowd of people. The purpose of such attacks is to panic among the population so that no one can feel safe, regardless of status, position, level of wealth. So is the case with Russia. Putin began to choose civilian objects not by chance. He needs to sow panic and fear so that the Ukrainians are not ready for any conditions, just to feel safe again as soon as possible. Therefore, objects for cruise missiles are selected with the largest concentration of people.

The strike on the shopping center in Kremenchug once again showed the level of Russia. At the moment, this entity, under the control of Putin, is a terrorist organization that, possessing nuclear weapons, poses a danger to the entire civilized world. The West needs to adopt an appropriate resolution at the official level so that Russia is perceived as a state sponsor of terrorism. This would increase the number of countries and companies that would refuse to cooperate with the aggressor, because the continuation of trade would mean support for a terrorist organization like Al-Qaeda, which kills innocent people.