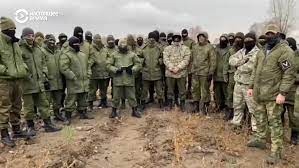 Often, the necessary equipment has to be bought by the relatives of the mobilized, as they themselves talk about on social networks. In some cases, recruits have to make do with Soviet supplies.
"The pea jacket is old. They gave it to us upon arrival. Ordinary pants, everything is as it should be. Raincoat-tent Soviet. Duffel bag. Hat hell knows what year. Which? 1982,” says one of the recruits from Penza in his video.

The former head of Roskosmos, Dmitry Rogozin, boasts on his Telegram channel that he delivered winter ammunition for the so-called people's militia of the "DNR". According to Rogozin, this is a uniform, insulated shoes, thermal underwear, knitted hats, gloves. Meanwhile, the Armed Forces of Ukraine are still trying to figure out the spring-summer collection of the Russian military: "Like in a shop window. The Second Army of the World. Bertsy on tape."

The Department of Strategic Communications of the Armed Forces of Ukraine published a video with the analysis of the Russian helmet. Under the cover, an old Soviet helmet is found, covered with rust in places. In the intercepted conversations of the Russians, it is said that they themselves use every opportunity to get hold of Ukrainian ammunition: “We are dressed in all Khokhlyatsky clothes.. I’m wearing knee pads, underwear – everything is marauding.” Things are no better in the Russian army with bulletproof vests.

Mobilized from the Krasnodar Territory, who have already ended up in Ukraine, are still sitting practically without all the necessary uniforms: “We were given Kalash and bayonet-knives.. No information, no command. We are sitting on pins and needles, because we don’t know where ours are and where strangers are. No walkie-talkies, no cartridges - nothing."

In St. Petersburg, a list entitled "The minimum set for leaving on a military mission" was circulated.. Relatives of the mobilized write that he is given out in the military registration and enlistment offices. There are 29 things in the memo. Among them are two backpacks, camouflage, a Swiss knife, a flashlight, a phone and a bulletproof vest.. The cost of such a set can be about 200 thousand rubles ($3252). However, the necessary ammunition has long been out of stock.
Back in early October, the official portal "Explain. RF" reported that compensation for the purchase of ammunition was not provided.

Ilya Shumanov, CEO of Transparency International in Russia, spoke about corruption in the Russian army.
"... That equipment, that equipment, that weapons that are, it is often unsuitable for use. And this is confirmed by the large number of captured Russian weapons, equipment and Russian equipment. Their Ukrainian side is not shy to show. This is the best element of discrediting the Russian army by Ukraine.

Equipment, equipment and supplies were purchased by the Department of Defense through non-transparent procedures. And as the materials of criminal cases show, 50-70% of the allocated funds for re-equipment, for restoration, or for the purchase or repair of military equipment and equipment often remained in the pockets of those people who were responsible for these purchases.. There is a certain element in this of a possible rescue or reduction of the risks of death of the personnel of the Armed Forces of Ukraine due to the fact that the Russian army, as it turned out, is quite corrupt, if you rely on open sources and decisions, on the materials of criminal cases."