Pope Francis admits that NATO did not cause this war 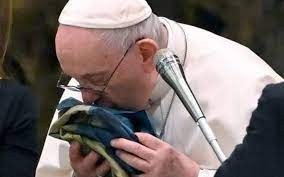 Metropolitan of the UGCC Boris (Gudzyak) gave an interview to Telegraph

“In addition to the fact that Pope Francis has already prayed for Ukraine hundreds of times, he delivers solemn speeches to the world twice a week – on Wednesday and Sunday. Almost every time, even until February, he speaks about Ukraine and condemns all the atrocities. For many months Russia was not named, but since August 27, when there was a sharp statement from the Vatican, Russia was finally named. The Pope, in the presence of two laymen - Denis Kolyada and Miroslav Marinovich - clearly said that he who does not defend himself is likened to a suicide. And those who defend themselves defend innocent people as well,” said Metropolitan Boris.

However, according to him, some previous double-digit things, of course, remain in memory.

“It is very important and, it seems, it is not fully realized that the release of our prisoners of war, including the Azov commanders, took place with the assistance of the Pope. Negotiations were held, in which the Turkish president took part, and it looked like Turkey already seems, and the Pope, through Erdogan, pushed this process. And this was based on the requests of the Ukrainian authorities. Budanov was there. Denis Kolyada invited the Pope to meet with him. It was a very meaningful and lengthy meeting that took place back in August,” Bishop Boris said.

The Metropolitan of the UGCC emphasized that the Vatican does not work in the spirit of political statements. He tries to leave the opportunity to be an intermediary until the last moment. At one time, Pope John Paul II bypassed the name of the aggressor country when there was a war in Yugoslavia.

On the contrary, if Ukraine had been in NATO since 2008, as President Bush then proposed (but France and Germany prevented this), this war would not have happened. Dad nodded his head, he admitted it. The process of communication continues, and there is no doubt that the Pope is deeply disgusted by the actions of Russia. He told Patriarch Kirill in a direct conversation that he could not be a servant of Putin, the authorities. Therefore, the Patriarch did not want to meet him in Kazakhstan. Because the Pope spoke clearly and in a way that the Popes had not spoken before,” Metropolitan Boris (Gudziak) emphasized.

Pope Francisk , during another speech at the Bahrain interfaith summit, paid great attention to the terrible consequences of world wars.

Pope Francis told a "dramatic scenario", also called "children's", in which the leaders of the states "play with fire, missiles, bombs and weapons, covering our common home with ashes and hatred."