On the way to getting "Abrams" 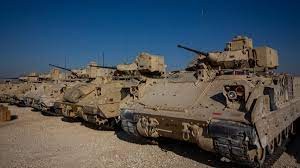 The heavy armament of Western partners is the key to the success of the Armed Forces of Ukraine on the battlefield. It is worth paying attention to how the HIMARS, which were adopted by the United States as early as 1983 and which could be considered obsolete, became the lever that turned the tide of many counteroffensives of the Ukrainian defenders. Similarly, Ukraine, almost from the first day of the invasion, demands from the United States and NATO member countries to provide tanks "ABRAMS". According to the Ukrainian General Staff, a sufficient number of them will help the Armed Forces of Ukraine to defeat the enemy on the battlefield in the shortest possible time.

However, the West continues to insist that NATO tanks will “escalate” the confrontation and provoke a war between Russia and NATO. It is impossible to say with certainty that the West is wrong. However, Putin has proven that he is an unpredictable character, and therefore NATO is acting gradually and cautiously.

After more than 10 months of war, the United States decided to transfer Bradley armored personnel carriers to us.. These armored vehicles are capable of transporting infantry and attacking enemy tanks with cannons and anti-tank missiles.

This is, in a way, a transitional period before the US is ready to transfer more powerful weapons systems to Ukraine. For example, such as "Abrams". Russia has said several times that the transfer of heavy weapons will lead to an escalation of the conflict in Ukraine. However, no matter how the West increased the supply of aid to Kyiv, the only escalation that the Kremlin decided on was the destruction of Ukraine's critical infrastructure.

Since this did not force Kyiv to surrender, the West decided that the transferred heavy armored vehicles would not fall into the hands of the aggressor and would be used by Ukraine for an early victory. If the Bradleys are handed over and the Armed Forces of Ukraine, as always, show the skill of using Western weapons, then in the future we should expect even better armored vehicles from partners.

What Ukraine demands - Abrams, more western MLRSs, more air defense, aircraft supplies - will be provided in sufficient quantities only after the Bradley is demonstrated by the Ukrainians in battle.