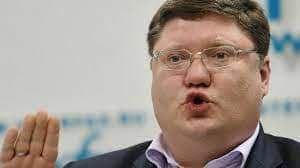 After watching the speech of Andrei Isaev, deputy head of the United Russia faction, on the Internet, you once again understand that the lexicon of a normal civilized and well-mannered person does not contain those words that are not even suggested, but simply burst from the throat.

Outwardly, also a man, Andrei Isaev, on two legs, with two arms, not covered with monkey hair, says things that leave no doubt about his mental state. Sick! All over your aching head. Or he is so cynically deceitful that he has long crossed the border between a normal, at least partially psychological state and outright psychiatric pathology.

The successes of the Armed Forces of Ukraine in recent days have so impressed Russia at all social levels that some do not know where to run (residents of the regions bordering Ukraine), others do not understand what and how to lie about (Skabeevs, Simonyans and other Kiselevs), others are ready to run to negotiate on any conditions for the end of the war, because they understand that the next stop on the route of the Armed Forces of Ukraine is Rostov. Only the bunker calmed down, because no “good mine” saves with such a “game”. The only thing left for him is to make pathetic talk about the need to "stop the bloodshed" because, in his words, "this is not a movie." Of course - "not a movie"! The victories of Ukraine, although not yet total, but already crushing for the occupiers, are a reality.

Watching the mouthpieces of the Kremlin and the change in public rhetoric, it becomes clear that Russia “fell under itself without taking off its underwear”. Perhaps for the first time in modern history. And "for the most part". And trying to hide his humiliation and confusion, he begins to invent such tales, even surpassing all previous nonsense.

We, Ukrainians, have already become accustomed to the fact that "a special operation is a preventive warning retaliatory strike against the Ukrainian threat". But the fact that the "nose" in the News Van Isaev studio (hairstyle, glasses, tricolor on the lapel, emotional movements ...) does not fit into any gates. Andryusha is amazed and outraged by the "war that Ukraine started with the aim of destroying Russia." No more and no less.

Looking at this farce, I constantly waited for the nurse to come out with medicine and a glass of water.. Either a doctor with an electric shock, or orderlies with a straitjacket. Not wait. Unfortunately, neither the sister, nor the doctor, nor the orderlies came out.. No one wanted to help a sick person. And the whole studio, which, probably, is also sick, because it allowed such nonsense to be carried by a lying madman.

It is frankly pleasing that in Russia, a strict regime psychiatric colony, those who saved their minds began to appear. “Abdication of the Throne” from Putin is demanded by more and more Russian municipal deputies. Representatives of 35 municipalities of Moscow, St. Petersburg and other cities of Russia put their signatures under the petition with such an appeal.

This is the beginning. The first "swallow" of understanding by Russians of the realities of the present, terrible and disastrous for Russia. Unfortunately, the number of those who have lost their minds in the huge Russian “studio” far exceeds the capabilities of any social medicine, which is now frankly lacking “doctors”, “nurses” and “orderlies”. But Ukrainians are powerfully cutting the ground from under the feet of the Kremlin regime. And, finally, ordinary Russian viewers will get tired of watching the performances of crazy clowns, terminally ill after Putin's lobotomy.