Our enemies will perish like dew in the sun... 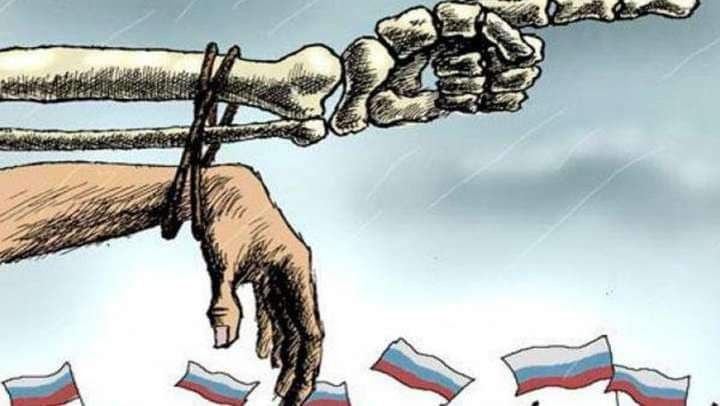 According to the statistics of the Office of the United Nations High Commissioner for Refugees, as of June 16, 2022, there are about 5.1 million refugees from Ukraine in 44 European countries. According to unofficial data, the number of those who were forced to leave Ukraine, saving their lives and the lives of their loved ones from the horrors of the war that Russia unreasonably launched against Ukraine, is already approaching 8 million.. These are impressive, scary numbers.

Considering the criminal means of warfare by the Russian occupiers, who could not achieve any tangible victories in a purely military confrontation and switched to the tactics of genocide and total terror of the civilian population of Ukraine, it becomes clear the number of those who were forced to leave Ukraine for the safety of their families.

The first, terrible invasion of the enemy choked. The courage and dexterity of the Ukrainian Defenders did not allow Putin to implement plans for an "instant" capture. The world community believed in Ukraine's ability to repulse the criminal Moscow horde. Democratic countries supported Ukraine in the fight against Evil and began to provide much-needed financial and military assistance to the Defenders of Ukraine, realizing that only a Ukrainian victory can ensure the peace of the world community.

The Ukrainians are returning, and the Russians, on the contrary, are increasingly leaving the expanses of Muscovy in the hope of improving their own existence, because it is by no means possible to call the vegetative life of people in Russia “life”.

According to Harvard University professor Konstantin Sonin, about 200,000 people left Russia in the first two Sundays of the so-called "special operation". And that was just the beginning. Now 150-200 thousand Russians run away from the "white birches" every month. Moreover, if in the first months of the “New War 2022” people planned to “sit out” the acute phase abroad and return back, now the majority emigrate forever.

How did the Putin authorities with their obvious “prospects” get to the “mentally sufficient” part of Russians, if even without night arrivals, Mariupol and Bucha, they are headlong fleeing the doomed country?

Representatives of the middle class, creative intelligentsia and IT industry specialists despaired of "Putin's bonded paradise." Young people do not lag behind them, who do not see the possibility of their own development and life in the “swamp concentration camp”, which the insane dictator skillfully built during the years of his reign. That is, those on whom the bunker grandfather placed special hopes for the "flourishing and strengthening" of Russia are fleeing.

The total outflow of the population of Russia, especially of its genetically valuable part, is projected by the end of the year at the level of 2-2.5 million. And this is without the transfer of hostilities to the territory of Russia, which is quite possible due to the quantitative and qualitative composition of the military resources of the Defenders of Ukraine, updated with the help of partner countries. How will Muscovites flee from Russia after the first rocket attacks on Rostov or Voronezh?!

Such an outflow of the promising population of Russia against the backdrop of the demographic crisis that has engulfed the country in recent years will eventually lead to a complete demographic catastrophe. After all, even without the outflow of those who do not want to live in the aggressor country after the start of the so-called "special operation", in order to stabilize the population (in the absence of migration) in 2020, a total birth rate of 3.03 is needed, in 2025. - 3, 41, in 2030 - 3.58, in 2035 - 3.77, in 2040. - 4.12, in 2045 - 4.53 and in 2049 - 4.80 children per woman. Raising even to 2.1 is unlikely. The birth rate of 1.6 births per woman currently observed in Russia will not be significantly exceeded in the short term.

Russia is dying and does not give birth.

In 2019, according to the World Health Organization, the overall life expectancy of Russians (men and women combined) was lower than in Sudan or Bhutan, places that the UN has classified as “least developed countries.”

Demographic security is an essential part of the national security of any country. By the criminal war against Ukraine, which has turned into a meat grinder for the "second army of the world", the Kremlin has already proved its inability to protect its own illusory interests, even in the confrontation with a much smaller, but, according to the Kremlin, weaker Ukraine. "Kolos" barely stands on its "legs of clay". The demographic catastrophe will only accelerate the irreversible processes of the destruction of Putin's power and the fall of the "empire" he longed for.