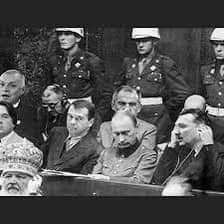 The elderly senile bunker idol lost his chance at the very beginning of the war against Ukraine. And there was a chance ... No, not to win! It's completely impossible! Putin then still had a chance to save Russia from total destruction and destruction of the country itself as such. But Putin did not seize the opportunity. Fool…

If he were smart, by the evening of the fourth day of the “three-day special operation”, realizing that no one was happily running to meet the invader with flowers, and the Ukrainian Defenders were not “Bandera’s men in carts with Maxim machine guns”, he would have given the order to stop the aggression. He would have withdrawn his, at that time, practically intact, troops from the territory of Ukraine, would have paid reparations for everything that he managed to destroy in three days, and would have knelt before Ukraine, begging for forgiveness for his own criminal stupidity, which led to the death of Ukrainians.

Then a tribunal took place. Those who drove into the old man's head thoughts about the very possibility of conquering Ukraine would be justly punished.. It is even possible that he himself, given his age and mental state, would have remained alive and would have lived out his shameful life in a psychiatric clinic for criminals, taking pills and drooling from his mouth. And they would even bury him in the cemetery under a tombstone made of two “penehodes”, with which he tried to trample on the peace and happiness of millions of people.

The chance is gone. Forever... Even if Putin wakes up today or tomorrow (which is absolutely impossible in the absence of brains), nothing can be changed for Russia and Russians. The country doomed by the Kremlin has not yet realized that this is the end. Judgment Day for Russia began on a cloudy morning on February 24th. And since then, a huge country has turned into a ship with the dead, heading into the abyss under the control of a dead captain.

Any movement of a doomed country is the usual inertia of a dead object. Thanks to its huge mass, this giant block will move for some time, destroying everything in its path. The speed of such movement is slowing down every day, but the threat remains. And this is the main danger for others.

Putin doomed Russians to total hatred of Ukrainians. The despair and confusion of the first days of the war gave way to rage and hatred for the country, which itself gave birth to and nurtured with its silence and mute permission for the crimes of the bloody dictator. And, if, at the very beginning of the aggression, Ukrainians hated Putin as the personification of the pain, suffering and misfortune of the Ukrainian nation, then during the ten months of the war, rage and a thirst for revenge at any cost have already spread to every Russian. Perhaps only with the exception of those who managed not to lose themselves in Putin's nightmare and spoke openly against the dictator's regime. But not heard...

Even without taking into account the democratically minded European, American, Asian and other world supporters of Ukraine, for whom the Kremlin, Putin and, in part, Russia, have also become the personification of global Evil, 30 million Ukrainians with a thirst for revenge, even at the genetic level, is a huge force. We will not be able to intimidate, no matter how the enemy wishes it. Neither shelling, nor blackouts, nor new amstors will break Ukraine and Ukrainians. Evil must be punished, and it will be punished by the terrible furious revenge of those who have lost relatives, friends, parents, children. Revenge on those who had the cynicism and impudence to call the rockets that kill Ukrainians "rockets of good"! To those who rejoiced at the shelling of Kyiv and Kharkov, who mocked at the "staged shots" in Bucha, who clapped their hands after arriving in Ukrainian kindergartens and hospitals.

The task of the Ukrainians after the obligatory victory is to make the earth burn under the feet of every Russian. Ukrainians are a merciful nation. But mercy must have its limits and concern only those who deserve it. There was a time when "simple Russia" could stop the madness of its own helmsman. As they say, "it was, and it floated". And the understanding of their own doom never came to the Russians. And they flee from Russia not because of the shame of the actions of their own authorities and disobedience to the Putin regime, but because of the horror of being "grave" and destroyed by the Ukrainians.

And this is different, this is not insight and awareness of one's own guilt, which, perhaps, would give a chance to alleviate the inevitable punishment. It is a simple fear of death.

Ukrainians are also afraid of death. But they do not run away from it, realizing that the future of the Ukrainian nation depends on each of us. It's not the time to hide and whine. It's time to fight and WIN! Because it is our purpose and our choice.

And the purpose of the Russians is to beg the winners for mercy on their knees.

And then we, the merciful ones, may give them one more chance to become human.