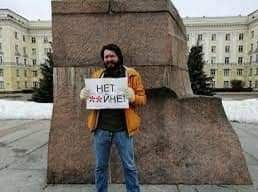 Another demonstration of "the unity of the party and the people" has "approached" in Russia.
"VTsIOM-Sputnik" again bothered the Russians with its telephone polls in order to determine the degree of support by the people for the actions (read: CRIMES) of the main bunker inhabitant.
Nothing new. As usual, the skilful “independent” sociologists of the Kremlin reached the target of 70-80 percent and proudly reported to the dictator that his “infallibility” was on the rise and that the country he had practically destroyed would willingly go with him to the very (already very soon) end…
We, Ukrainians, have long been accustomed to the "honest" results of the "impartial" sociology of Muscovy, no less than to the total Kremlin lies. The world democratic community has also already determined its attitude to the “Russian truth” and is not even trying to listen to it.. On the contrary, by all available means Europe is trying to reduce the flow of such "truth" and its possible impact on the population of their own countries.
In Russia, lies, unfortunately, almost no one resists. Individual attempts to tell the true truth by individual public figures and ordinary Russians are faced with total misunderstanding and accusations of "treason", followed by harsh sanctions against such "truth-seekers" by the Kremlin's power structures.
The real courage of individual “bearers” of the truth is impressive, who are trying to independently break through the “armor” of ignorance and zombification of Russians. Such as the man from Smolensk, who, from the first days of the criminal war unleashed by the Kremlin against Ukraine, has been standing at the crossroads of the city with a poster “No to war!”. For several months he stands among the human stream of typical representatives of the Z-nation in an attempt to "open their eyes" to absolutely simple and real things. Terrible in nature.
Of course, there are those who press his hand and treat him to coffee. They even express admiration for his courage. Such units. But even they do not stand next to him, but go further in their affairs in order to plunge into the whirlpool of lies again and forget the solitary figure of someone who cares about the real real truth.
As for the reaction of the vast majority of passers-by, it is quite expected. Perhaps such insults, the mildest of which is a “traitor”, this person has not heard in his address throughout his life.. Bruises on the face also eloquently indicate the "position" of this overwhelming majority. To understand how much the Russian people were swallowed up by the wave of total zombies, just look at the comments on social networks about the death of Ukrainian civilians after the attack on Amstor...
Therefore, no matter how much we would like the data “received” by VTsIOM-Sputnik to be a complete Kremlin lie, they are not very far from the real state of affairs of the Z-moods of the vast majority of Russians who confused twilight with morning and identified their dictator with "bearer of goodness and justice."
As long as a person in Smolensk is the only one standing at the crossroads, Russia will not wake up, will not come out of a coma and will not open its eyes. And how much is enough for this person, who himself admits that he is losing any hope and no longer knows what to do?!
A nation that has been ill for centuries and has not even tried to get rid of its illness has already plunged into the depths of the disease so much that there is practically no hope for a speedy recovery.