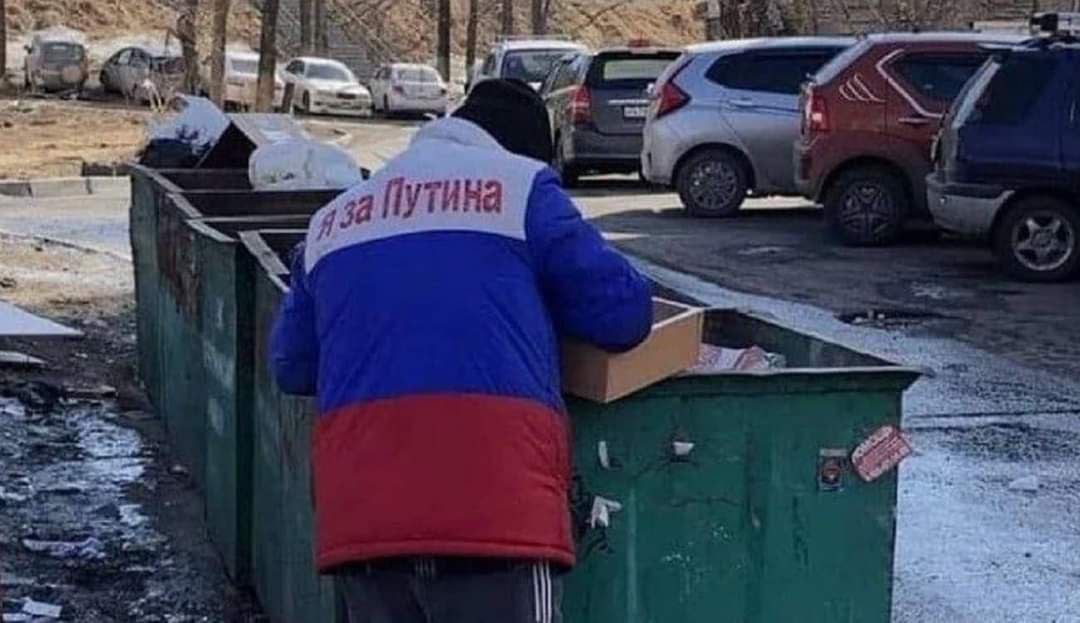 “Life has become better, life has become more fun!”... Probably, Russians have some inverted understanding of “better” and, moreover, “more fun”, if for many years they have been content with loud campaign slogans that Putin’s authorities willingly replaced the whole country even a hint of some improvement in a miserable existence.

Of course, we are not talking about a small percentage of those who are "bathing in oil" due to the plundered budget and various "pipes" pumping billions of dollars into their pockets.. Those are all "high"! But for ordinary Russia, the "bright future" has not come in a decade, so it will never come.

The war started by the imperious madman against Ukraine only accelerated the degradation of all spheres of life in a multimillion-strong country, which was already barely making ends meet.. While the elite, who has gone mad, is in the world of her schizophrenic fantasies and terrorizes the neighboring state, the Russians continue to plunge into the deep swamp of poverty.

Even according to surveys of pro-government institutions, more than a third of Russian citizens (35%) began to save on food, periodically denying themselves the most necessary things.. The purchasing power of ordinary Russians has fallen to 17 out of 24 basic food items. Citizens' spending on food purchases, according to Rosstat, has been declining for the 7th month in a row: by 1.7% in April, by more than 2% in summer, by 3.5% in September and by 4.3% in October.

Almost half (43.2%) of Russians have an income of up to 27 thousand rubles, one in four (25.9%) - below 19 thousand, and almost one in seven (14.5%) lives on an amount of up to 14 thousand rubles a month, t .e. less than $8 a day. And even $8 is just a dream for many. The Central Bank of the Russian Federation officially recognized that “unemployment has renewed its historical minimum. Against the backdrop of the effects of partial mobilization, labor shortages are increasing in many areas.”. The “brilliant” power of the Kremlin did the impossible - they “grave” a significant part of skilled workers and threw them into the mouth of the war, creating a significant shortage of professionals in various sectors of the economy and production, leaving those who have no skills and cannot find a job. Or he doesn't want to. Because the unrestrained traditional Russian drunkenness leaves neither time nor energy for any work, except to steal something and sell it for another bottle of vodka.

The share of unsold apartments in new buildings as an indicator of the financial capacity of the population throughout Russia has reached 66%. This is a record for the entire time of research (RBC).

The total deficit of the budgets of the regions of Russia will amount to 1.7 trillion rubles (the Central Bank of the Russian Federation). This is a record for the last 16 years. And all this against the backdrop of billions of dollars spent on a crazy war that stole from the Russians any hope of improvement.

The army that invaded Ukraine took 10 years to build, and $770 billion has been spent on it since 2011. At the moment, this "invincible" army has lost from 30 to 40% of its equipment. Thus, the occupiers need from 3 to 5 years to compensate for the losses of this year alone. And this is without taking into account the sanctions regime.. Abyss…

Against the backdrop of the economic abyss, the social abyss is deepening, into which the Russian nation is rushing. Of course, it is much easier to follow the development of LGBT events in the West and ridicule the concept of “fathers 1 and 2” than to admit that things in Russia itself have indeed taken on the signs of a total social and moral catastrophe for the whole nation. The number of sexual crimes against children in Russia increased by 44% - from 9,524 in 2010 to 16,887 in 2021, according to the Prosecutor General's Office in the minutes of a meeting of the government commission on juvenile affairs.

It is noted that 50% of such crimes are committed by a person familiar to the child, one in five by family members, 11% by parents or legal representatives, 25% by persons in a state of alcoholic intoxication and persons suffering from mental illness.. Apparently, Russian children who are abused by such “fathers” would willingly exchange their suffering for the opportunity to grow up in a European family, even with “fathers 1 and 2”.

But no! For these are “their own, strong” rapist parents – representatives of the “great and blessed” Russian pseudo-nation, which the black-mouthed priests of the Russian Orthodox Church constantly remind their “children” of - the FSB structure, which, under the guise of the “word of God”, carries in its temples a genuine Satanism, calling for violence and crimes.

Senseless, powerless and incurable Russians faced the fact of their historical disposal. In the early 1990s, Russia still had a choice. And everything could be completely different. If you are not your own enemy. It didn't work out. Lost nation turned out to be its own enemy. For your children, for your future. What the country has become, this aggressive concentration camp for the mentally ill, can no longer be saved. The only thing left for the Russians themselves is to quickly destroy the "white-stone" barracks and try to build their life "from scratch". Your future.

On such construction and unemployment, perhaps, will be forgotten forever.