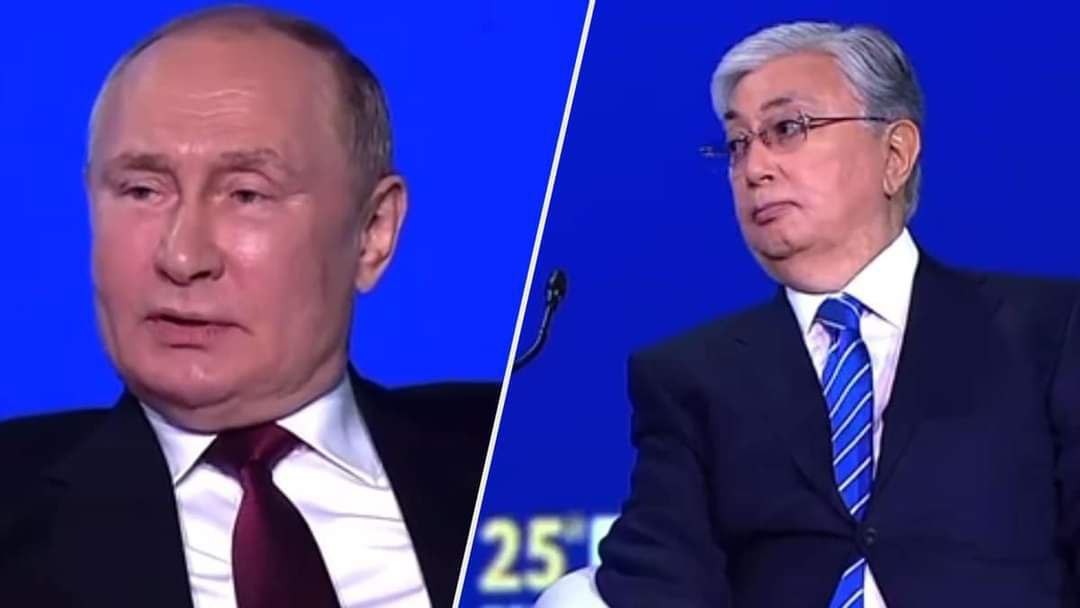 The Kremlin's international "bastions" continue to "change flags on their poles." Those whom Putin counted on as a reliable partner in his criminal actions are actively rebuffing the dictator. Russia, thanks to its aggressive and insane policy, is isolating itself more and more every day and, in the end, will remain itself against the entire surrounding civilized world.

The traditional partner of Russia, Kazakhstan, at the next Economic Forum in St. Petersburg, by the voice of its president, proved that Kazakhstan does not intend to support the Putin regime in its imperial whims and international crimes against other independent countries. The President of Kazakhstan, Kasim-Jomart Kemelevich Tokayev, “in the eyes” of Putin clearly said that Kazakhstan would never recognize such quasi-enclaves as the LNR and the DNR as independent full-fledged countries.

Putin did not expect such a "set-up" from the president of the country, which the Kremlin traditionally considers its "satellite" or even "vassal".

Kazakhstan and Russia are the closest neighbors and the most important allies not only in the post-Soviet space, but also in the international arena in general. The nature of relations between states is determined by a unique geographical feature - the longest state border in the world with a length of 7.5 thousand km. There are 12 Russian and 7 Kazakh regions along the border.

Russia urgently needs Kazakhstan as a reliable partner in the economic, security and geopolitical plane. However, Russia's relations with Kazakhstan have recently deteriorated significantly due to many points of conflict and the growth of latent tensions, due to both internal causes and global trends.

In the context of the growing popularity of the national-patriotic ideology and the strengthening of national self-consciousness in Kazakhstan, the periods of joint residence of the Kazakh and Russian peoples in one state began to be considered as having a negative impact on the development of the country. The Kazakhs began to understand that “friendship with a big neighbor” did not bring anything good to their own country.

The January political tension in Kazakhstan at the beginning of this year, when Putin, as if by notes, created the prerequisites for the introduction of the "peacekeeping" forces of the CSTO into the territory of Kazakhstan, did not give any bonuses to the Kremlin. The military contingent of the CSTO (including Russia), despite the intention to stay and turn Kazakhstan into a 100% “vassal” of the Kremlin, was withdrawn from the country just 5 days later.

Even then, the authorities of Kazakhstan made it clear to the Kremlin that they did not want to be "complicit" in Putin's dictatorship. Kazakhstan has its own views on the future, in which Russia can only be an equal partner and not try to dominate relations between these countries.

Tokayev is a true politician of the highest international level. He worked for several years as UN Under-Secretary-General and was in charge of the UN office in Geneva.. He served as Secretary General of the United Nations Conference on Disarmament. He was the Minister of Foreign Affairs of Kazakhstan. Currently he is the Chairman of the Council of Heads of State of the CIS. That is, Tokayev is a powerful political figure, by the way, the only person of this level who visited the Economic Forum. And - on you! Such a frank public statement.

Having received such a “slap in the face”, Putin, out of habit of the “Petersburg gateway”, immediately “answered” Tokaev, calling him Kamizham Ishemilevich. Putin was not enough for more "great geopolitics" ...

In addition, the President of Kazakhstan, Tokayev, refused to accept the Order of Alexander Nevsky from the war criminal and international terrorist Putin...

A few months ago, the Putin regime considered Kazakhstan its colony and was confident that after helping Tokayev during the January crisis, he would become another obedient puppet. But it was not there, as the old dictator wanted. Russia remains almost completely alone. Syria, Cuba and Eritrea, in addition to the LPR/DPR, can hardly be considered strong Kremlin support.

The bitterness of the “broken pots” with Kazakhstan for Putin is exacerbated by the fact that President Tokayev has publicly put the Kremlin in its place, not only in his own name. Everyone knows the close relationship between Kazakhstan and China.

Therefore, most likely, the frank position of removing Tokaev from the Kremlin's crimes is a manifestation of the general coordinated position of Kazakhstan and China, on the support of which Putin placed great (and, in fact, the last) hopes.