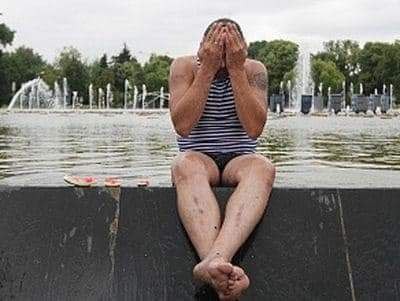 The war will definitely end. Sooner or later ... But - definitely. And those who are now shedding their sweat and blood for their homes, for loved ones and loved ones, for the Ukrainian Nation will return home. Winners. It simply cannot be otherwise.

The country will welcome them as heroes. Why "how"? They are real HEROES who showed the enemy "his place" and sent to hell. Or even further, to Kobzon's free festive concert in honor of the crushing defeat that the "second army of the world" suffered from "a bunch of Bandera on carts." There will be a holiday in hell too. For so many lost souls have never been taken into their hot embrace by infernal cauldrons. Nothing, there is enough space for everyone. Every murderer, marauder and rapist who brought Evil to the Ukrainian land will receive what he deserves according to his terrible merits.

Warriors of Ukraine will return home. They have where and to whom to return. After all, all the days and months of the war, terrible and endlessly long, like life, were waiting for them. They waited and prayed. Those for whom blood was shed. Those for whom the earth burned under enemy feet. Those with whose name on their lips our soldiers went to their deaths.

Ukraine will greet its Defenders with flowers, fireworks and tears, which will mix joy for those who have returned and sadness for those who have remained forever in the terrible war. Who will never hug and hug his beloved. Will not bow to the parents who gave birth to the Hero. He will not take his daughter or son in his arms. But they will leave behind an eternal bright memory, a sincere smile in the last photo and VICTORY ...

The pain of relatives is forever. As is pride. For those who gave their lives for the lives of others. Acquaintances and strangers, relatives, friends. Those whom he loved. Those with whom you may have quarreled. Or did not even notice in a peaceful life. For all Ukrainians and their future, which now, after the victory, will definitely be happy.

Return home and those who stood in the war on the other side of the front line. The language does not return to call them warriors. For “warrior” is, first of all, “courage”. But the enemy had no courage. And it couldn't be. For if there was courage, then there would be no this causeless bloody aggression against Ukraine. There would not be tens of thousands of deaths, broken lives and mutilated destinies. If the Russians had the courage, the bloody bunker dictator would not have spoiled the air with his bad breath for a long time. It would be a completely different life. There would be peace and quiet. First of all, in Russia itself.

Russia does not yet know horror. real. The one when, after a crushing defeat in a senseless war, tens of thousands of surviving criminals with a completely destroyed psyche will return to their relatives. To those who would like to see them in the form of a brand new white Priora, and not a mutilated body that has lost the remnants of its mind. And then, after the "triumphant" return, such "heroes" in a drunken frenzy will soon begin to ask questions that have no answer. At least in their immediate environment. "Why?!!". "For what?!!!".

It is unlikely that quotes from Putin's manuals will quench their hatred and rage, which will certainly come in place of the lack of courage.. But “against the“ sheep ”- all the“ well done ”. Such "fellows" do not have the courage to ask questions to those who started this war, destroyed Russia, dishonored the Russian nation. Therefore, they will not blame Putin, but their own environment, relatives and friends.. And Russia will tremble from the drunken fury of the "invincibles". And the consequences of the Afghan syndrome, compared with the consequences of the Ukrainian fiasco, will look like flowers in a flower bed in a kindergarten.

To each his own. And it will definitely be. Each side will get what it deserves. Ukraine and Ukrainians - flowers, fireworks, joy of meeting, tears of loss and pride of their sons. Russia - the furious hatred of a betrayed defeated nation, directed at themselves. On those who allowed one mentally ill animal to rape and throw in the trash the honor, pride and humanity of the entire Russian nation.

Freedom Matrix
Теги: russia ukraine heroes victory war winners to each his own in a drunken stupor